Jason & The Scorchers at Off Broadway, 1/13/12: Review, Setlist and Photos 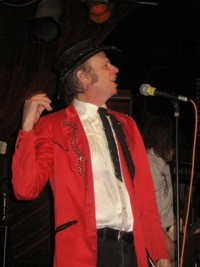 As band after band from the 1980s and 1990s reforms and revisits past glories, one could be forgiven for questioning their respective motives. However, early in their set, Jason & The Scorchers wanted us to know that this night would be different. Currently celebrating 30 years in the biz, lead singer Jason Ringenberg acknowledged those bands who seemed to exist only to "milk the market," but clarified that Jason & The Scorchers wanted to be known for "thirty years of still making great music." True to its word, Jason & The Scorchers' Off Broadway set was an extended romp through three decades of back catalog, from 1982's Reckless Country Soul through 2009's Halcyon Times.

This Nashville band is currently down to two original members: Ringenberg, who still looks every bit like a cosmic cowboy who wandered into a punk club, and guitarist Warner Hodges, whose thick lead and rhythm parts evoked a three-way cross between Chet Atkins, Johnny Thunders and Duane Allman. Bassist Al Collins and drummer Pontus Snibb comprised a more than capable rhythm section, ably keeping up with the two vets.

At Off Broadway, Ringenberg proved himself not only an evocative songwriter, but a master storyteller and MC. He prefaced most songs with little stories about how they were written or what he was thinking at the time. For example, he reminisced about writing "Bible and a Gun" with Steve Earle, and how the two of them would "eat barbeque, shoot guns and write songs. That's as close to church as you get in Nashville these days." Before covering the Byrds' "Drug Store Truck Driving Man," he gleefully related how their rowdy version had annoyed Nashville DJ Ralph Emery -- apparently the very same guy who snubbed the Byrds when they played the Grand Ole Opry in the 1960s. For those attendees less than familiar with the Scorchers' catalog, his patter helped make the songs that much more memorable.

Musically, the Scorchers' impressed with their range and depth. The band was capable of handling both country weepers and rowdy double-time stomps, and the energy rarely flagged. It's apparent why they were so frequently associated with such 1980s as the Blasters and X; like them, the Scorchers combine evocative, storytelling lyrics with a healthy reverence for American music -- but not so reverent that you couldn't pogo to it if you wanted. A new song, "Thanks for The Ride," glowed with appreciation for those fans who'd stuck it out with them this long.

The Scorchers have been frequent St. Louis visitors throughout the years. Ringenberg spoke of playing such defunct St. Louis clubs as Mississippi Nights and Billy Goat Tavern. He also offered effusive praise to local songwriter/Bottle Rockets leader Brian Henneman, who opened the show as a duo with Kip Loui. Ringenberg called the Bottle Rockets' The Brooklyn Side his favorite album of the 1990s, and "I'll Be Comin' Around" his favorite song of the 1990s. High praise indeed.

Henneman joined the band on guitar for their first encore, "If Money Talks." Then Todd Snider, who was in town playing the Sheldon Concert Hall, jumped behind a mic with Henneman for a drunken singalong version of John Denver's "Take Me Home, Country Roads." By the second encore, "White Lies," the band was chaotic, the crowd was singing along, and Ringenberg observed the whole scene with a knowing look that seemed to be half cockiness, half humble appreciation. A special night for fans and newcomers alike.

Notes and setlist on the next page. Critic's Notebook:

Stacie Collins, bassist Al's spouse and songwriting partner, took over lead vocals for two songs. Her enthusiasm, charisma and Janis Joplin-like energy provided one of the evening's unexpected highlights. According to her web site, she's supposed to be opening her own tour in St. Louis on February 17th.