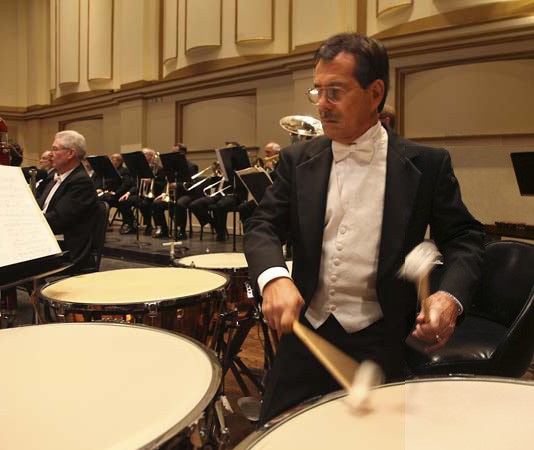 Richard Holmes was the St. Louis Symphony's Principal Timpanist for 41 years. He died last June after several years of dealing with cancer. "When you think about classical music, it is a reflection of all aspects of living, of a culture," says SLSO Percussionist John Kasica, who worked with Holmes when they were both students at Julliard and played with him for nearly his entire tenure with the SLSO. "[Holmes] taught people how to be excellent through classical music and also just in their lives. It was an honor and privilege to play with him."

In addition to his work as a timpanist, Holmes conducted youth symphonies; rode horses; painted; spoke German, Italian and French; and made his own drum sticks. "He was a great innovator," says Kasica. "His life reflected a way of living that I try to emulate."

The SLSO will pay tribute to Holmes tomorrow night at Powell Symphony Hall with its performance of Dvorak's Symphony No. 7, Crumb's A Haunted Landscape and Richard Strauss' Four Last Songs. St. Louis native Christine Brewer will sing the soprano roles on the latter.

Kasica says the program was "perfectly chosen to reflect who Rick was as a person." The Crumb piece employs a variety of percussion sounds and the Dvorak features a prominent timpani part. "It's the type of piece that Rick would be a star at," says Kasica.

Holmes had a voice scholarship to Julliard and mastered the cello, trumpet and piano. He even dabbled in the accordian. "The guy was a super talent," says Kasica. He says Holmes' range of talent, for music and language, allowed him to be an exceptional communicator of his parts. "He was much more able to project the styles of the composers."

In his time with the SLSO, Holmes earned the adoration of the audience -- Kasica describes him as a "favorite." Part of his appeal went beyond the stage to his work with the community. "The manner in which he carried himself was always with great etiquette."

Toward the end of his life, Holmes underwent chemo therapy and the struggle with disease became harder and harder. "He never complained about it. He might have been in pain, He might have been ill, but he showed up to work," says Kasica. "He was inspiring."