The Bad Plus at Jazz at the Bistro: Review 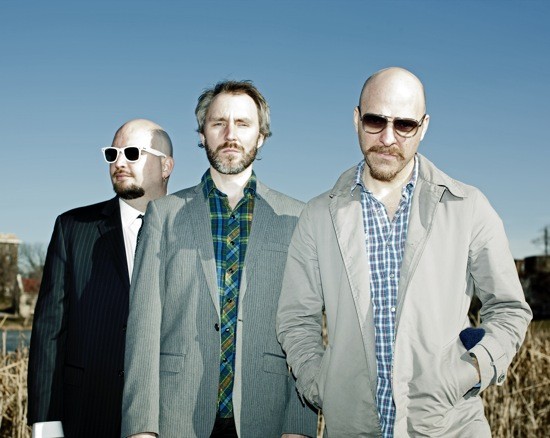 Last time The Bad Plus rolled through Jazz At The Bistro, the trio played with the fire of a group intent on proving itself. This time around, pianist Ethan Iverson, bassist Reid Anderson and drummer David King appeared comfortable and relaxed, even when the tempos blazed. The band is touring behind its first album of all original material Never Stop, and its setlist at the 7:30 set on Friday reflected this fact. Gone were the repurposed pop songs, the games of "name that tune" that the trio tends to use as a crutch. By playing its own songs, the Bad Plus forced the crowd to tune in to its impressive, occasionally innovative musicianship.

While Iverson's knotty piano -- not too far detached from his contemporary Vijay Iyer -- is the de-facto leader of the group, his playing was relatively understated. The expressive David King was the most endearing performer on stage, smiling constantly while he dexterously pinballed around his kit. Anderson was the evening's makeshift MC, and he clumsily introduced songs with a wit dryer than the Bistro's most tannic red wine. Sample: "That song was called 'Rhinoceros Is My Profession.' It's about a rhino who lives in Spain on a steady diet of olives and Manchego cheese. He goes to the market and gets frustrated that his favorite shops are all closed from three to five every day." Quite a backstory for an instrumental tune.

There was a strange honesty to Anderson's introduction, even if it was full of rhino shit. The Bad Plus' tunes are highly structured, storytelling affairs, far from the simple head-solos-head pattern of the traditional jazz standard. Time signatures shift effortlessly, and the trio never seems to struggle when things get geometric. Opener "Wolf Out" displayed more U-turns than I made getting out of downtown (is every ramp to 64-East closed?!). Ethan Iverson's composition "2 PM" felt at times like free jazz, although the trio's parts were regimented beyond visceral comprehension. At times, it seemed the only trademark of jazz in the Bad Plus was its instrumentation. If Reid Anderson swapped his upright bass for an electric and Iverson whipped out a synthesizer, we'd all be comparing the Bad Plus to Yes rather than Medeski, Martin & Wood.

The group also shined in its more straighforward moments, particularly when drawing tension from slowness. "For My Eyes Only" was a dirge ballad, its tempo anchored like a stoner metal track. Ditto for closer "Lost Of Love," which hung on the back end of its tempo throughout. A highlight of the evening was "I Want To Feel Good Pt. 2," as Anderson explained "We like complex emotions, but sometimes you have to go for the jugular." The complex, speedy number came off like a time-warped "Take The A Train" by Duke Ellington, and it was an ideal showcase for King and Iverson's interactivity. The evening's climax came courtesy of "Never Stop," a tune actually written for Fashion Week in New York -- a fact that Anderson looked particularly uncomfortable revealing. Built around a four-on-the-floor kick drum that employs the song title as a mantra, "Never Stop" was a surprising disco jam. If post-rock band Maserati made an acoustic album, it would likely sound like this. In a certain way, the song functioned the same as the Bad Plus' cover tunes. The trio treated its beat as a template, and used the familiarity as a starting point for abstraction. "Never Stop" succeeded because it showed Iverson, Anderson, and King letting go of their crutches -- be it the cheeky covers or the brainy math-jazz writing -- and being their playful selves.

Personal Bias: I've yet to be impressed by a Bad Plus recording, even the live ones, but the trio consistently sounds warm and beautiful in the Bistro. It's too easy to fall back on the "You should have been there" mentality, but it is very appropriate here.

Overheard: "Thank you, sir. I've got you taken care of on the card, don't you worry" coming from an older man speaking to his waiter, seemingly embarrassed that there was no money on the table.

Random Detail: From the crowd's perspective, Ethan Iverson was on the left, decked out in a well fitting suit. Reid Anderson was business casual in center, and to the right Dave King sat in a t-shirt with his tattoos showing. It looked like a reverse evolutionary chart on dressing up.

By The Way: The Bistro audience was mostly older folks, and I made the assumption that anybody there under the age of 30 is most likely also a jazz musician. Kind of a bummer that the crowd was so insular, since the Bad Plus is one of the few jazz acts around today with a crossover audience. Was there anybody at the show who can correct me?