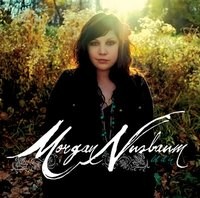 Morgan Nusbaum | Let It In

If you've previously encountered Morgan Nusbaum as the harmonically gifted bassist/backup vocalist for the dear, departed 75s or as the banshee-howling leader of Bruiser Queen, you'll likely be surprised by the emotionally resonant but relatively low-key songs on Nusbaum's solo debut. Let It In hews pretty closely to minor-key singer-songwriter turf -- her pop, punk and pop-punk leanings are set aside for broadly strummed acoustic guitars and sometimes quavering, sometimes fragile but never retiring vocals. When that venom springs up, as it does on the sinister and seductive "Every Night," Nusbaum can summon up some vocal firepower against big swaths of overdriven guitar and Jason Potter's sympathetic, unfussy drums. But for the bulk of the album, the girl-and-her-guitar approach serves the singer well, even if she is still learning how to best use her big voice in this more subdued setting.

Coming square in the middle of an eleven-track album, "19" is both the disc's most unadorned recording and its most potent performance. Blame it on the ubiquity of "Rolling in the Deep" or that the song title recalls Adele's debut record, but the song could pass for a demo recording of that young British soul singer. Here, Nusbaum shouts at the mountaintops in the chorus and lets her own brand of soul -- wounded and righteous -- climb the crest of a wave and then lets it ride on down. At times the vocals are roughshod, as is some of the guitar work, but it works as a hybrid of the singer-songwriter genre and the garage-rock aesthetic that both Nusbaum and Potter love so dearly. But like a good soul singer, she's also a good interpreter of others' work. A spare, slow-burning turn at Cat Power's "Metal Heart," complete with a last-minute drum explosion, takes the song back to its Moon Pix roots and away from Chan Marshall's recent lightweight-blues renditions. Consider Nusbaum's version an act of artistic reclamation amid an album built around her own artistic rebirth.

Interview: Bo & the Locomotive And Union Tree Review Interview Each Other

Local legend Black Spade has long been known for taking hip-hop off its beaten path. Just as capable a producer as he is a singer and emcee, Spade's soulful vocals tend to melt effortlessly over his warm synths and dizzying drum patterns. This show will celebrate the release of his latest album, The Sweetest Revenge, a collaborative effort between Spade and F5 Records' DJ Crucial. The album boasts guest appearances from other Force affiliates such as Nato Caliph and Tef Poe.

Troubadour Dali writes pretty good songs, but the psych-rock band is better at making albums. Its swirling sonic palette doesn't alter much from track to track -- jangling British Invasion-era licks, fuzzy, buzzy bass lines and coolly arid vocal performances set the stage for nearly every song, and they often bleed into each other after a few listens. But the band's second LP, Let's Make It Right, hits the crest of an ever-growing wave on "The Prickly Fingers of Sante Muerte," the album's penultimate track. The song releases the cumulative tensions of the record by providing a micro view of what Troubadour Dali does best. Spare acoustic guitars and minimal percussion give way to a stacked guitar symphony and harmonically tangled vocals. A simple riff unfolds into something totemic. The slow-building narcotic begins to seep through your pores, and you wonder about the chemical reactions taking place in your brain and on the disc.

All of which is to say that Right is a step up from Troubadour Dali's fine-but-scattered debut. The sophomore LP streamlines the band's m.o.: pop-friendly shoegaze that never loses a song's melodic center of gravity. From the slap-back reverb and twangy guitars that opens the disc with "Pale Glow," the band proves its skill at setting a mood -- one that is psychedelic without going too dark or too Day-Glo cheesy. Casey Bazzell places her sirenlike vocals above Ben Hinn's monochromatic, magnetic delivery, which becomes the calm in the eye of the storm, never giving ground to the swells and squalls going on around him. Bands like Ride, the Jesus & Mary Chain and the Dandy Warhols are all clear touchstones here, and one is apt to forgive a lack of invention in favor of nailing a genre's tone and effect.