Googolplexia Has Your New Year's Eve Fun at Mangia Italiano 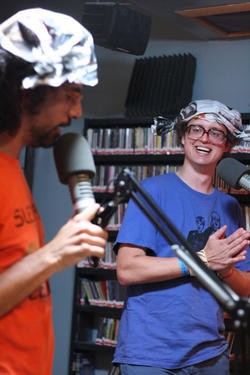 Googolplexia, performing New Year's Eve at Mangia Italiano, is an a cappella engine powered by brilliant comedy. Rob Severson performs as a one man band, equipped with a wireless headset and the occasional instrument. The songs are wrought by vocal melodies and lyrical genius. Googolplexia will be engaged in a special hour-long performance, taking from his bag of originals, classic covers and tribute tunes. Googolplexia often calls upon the crowd for support, so expect sing-a-longs, rhythmic stomping, impromptu beat boxing and any other trick up his mustard-colored sleeve. At midnight he will be joined by playful electro-pop duo Superfun Yeah Yeah Rocketship, who will then take the stage and give its first performance of 2012. Superfun properly smashes the guitar into a synth-ridden drum loop, expressing quirky songs amidst on-stage antics.