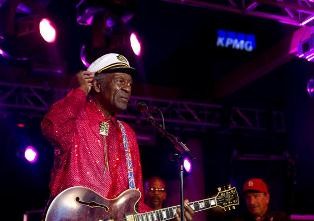 When it comes to his musical contributions, Chuck Berry's legacy is safe. St. Louis should be and is proud to claim Berry as one of its own for performing a slew of iconic tunes.

For the most part.

While Berry may have done much to lay the groundwork for modern rock and roll, that's not to say he's lived an error-free life. Far from it. He was, after all, incarcerated near the height of his fame for transporting a minor over state lines. He later served more time in jail in the late 1970s for income tax evasion.

And then there's whole scandal involving Berry clandestinely videotaping women in bathrooms. It's part of Berry's legacy that has 'icky' written all over it.

The St. Louis Post-Dispatch reported on this day in 1989 that Berry was being sued by a former cook at a Wentzville eatery known as the Southern Air. According to the article, Hosana A. Huck's suit accused Berry of creating videotapes "for the improper purpose of the entertainment and gratification."

Things got a lot worse the following year. In June, Berry's home was raided by authorities. With great fanfare, law enforcement officials claimed they had found videotapes, hashish, marijuana, three weapons and $130,000. Just as the dust settled, Berry was hit with a class action lawsuit from multiple women accusing Berry of making videotapes while they were "undressing and using bathrooms on his property."

Berry was eventually charged with possession of marijuana and three counts of child abuse. Ultimately, the child abuse charges were dropped and Berry agreed to two years unsupervised probation for the misdemeanor marijuana charge. He also agreed to pay $5,000 to a drug and alcohol rehabilitation program.

Several biographic accounts state that the scandal reaped a significant financial toll on Berry. For instance, Berry biographer Bruce Pegg told the New York Times that the scandal cost Berry $1.2 million - as well as substantial legal fees - to reach a settlement. And a Post-Dispatch article at the time noted that the criminal charges cost Berry a chance to appear on the Johnny Carson Show.

As noted in a 2003 RFT article talking about two Berry biographies,this point in Berry's history showcased a pattern that revealed Berry's darker tendencies:

Pegg, by contrast, goes out of his way to explain away some of Berry's more indefensible actions. Referring to the singer's legal battles of the 1960s and 1990s, Pegg writes that "both incidents resist easy moralizing." And though he admits that Berry's personal irresponsibility was a factor, he contends that much of the blame rests upon "the racism inherent in the American justice system at its many levels."

Perhaps that's true, but in general terms, having sex with minors and videotaping unsuspecting women in the act of defecating is the kind of stuff that gets people in trouble, regardless of race or celebrity.

As noted in an earlier post remembering Ike Turner, it's often a challenge for music lovers to separate a performer's professional gifts and personal failings. Turner is especially difficult to reconcile,because he never seemed to be that repentant about his abuse of Tina Turner.

Berry still remains popular, continuing to perform and be celebrated as a defining piece of St. Louis culture. Such a sentiment was perhaps encapsulated with the unveiling of statue in the Delmar Loop.

And even though Berry remains a rock and roll and St. Louis icon, his complete legacy will include his trail of legal problems.Just like Ike Turner or any other performers who've run afoul of the law, it's going to be up to listeners to ultimately decide whether such action overwhelms a musical legacy.

Chuck Berry This Day In History