Bo and the Locomotive | On My Way

Reverberation has been a part of music since the dawn of H. erectus, whose gigs were mostly in caves. And let us not forget the monks in their cloisters, who anticipated Sam Phillips and his slap-back, who anticipated Phil Spector and his wall of sound, who, it would seem, must have inspired St. Louis band Bo and the Locomotive, and its excellent, reverb-drenched debut album On My Way.

Bathed in delay and reverb, the stacked voices, stark guitar lines, baroque organ parts and bashing percussion could all amount to a post-primitive-rock muck-and-mire session, an over-signified gesture at false grandeur. On My Way works, however, largely because of the concentrated balance of bitterness and ennui in Bo Bulawsky's songwriting, and the way he lingers over his images, sounding sometimes like Stan Ridgway, in a good way, and sometimes just like a young man who seems to have found his voice in the ghosts echoing around him.

Key Track - "Behind Everything" is a colossally angst-ridden warning, a threat of betrayal, to the self and to a lying lover, friend or enemy. Bulawsky shivers and the band shivers along with him, finally building to a beautifully, noisy, desperate finale. 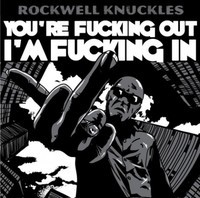 Rockwell Knuckles | You're Fucking Out, I'm Fucking In

Taking its name from the "inspirational" audiotape autobiography narrated by Eastbound & Down's feckless Kenny Powers, You're Fucking Out, I'm Fucking In may be less confrontational than its title suggests. But the mix tape goes to great lengths to show Rockwell Knuckles' boundless versatility. His prime directive is spewing funny and often dizzying rhymes in his low, almost Stentorian voice that shows the barest hint of Missouri twang, and on a track like "Silly Human," it's easy to marvel at the verbal dexterity, rhythmic precision and old-school soul that merge on the breathless chorus. Knuckles shares a few verses with local rhymesayers Vandalyzm and Tef Poe (not to mention Theresa Payne's crucial contributions), but for the most part this collection shows that he can create a rich, complex world unto himself.

Knuckles uses a range of productions to push his surprisingly agile voice into different contexts. He comes out smooth and smoky on "Play Catch," while the clicky "Every Angle" features his most dancehall-like delivery and a flurry of swooping synthesizer runs. His genre-less approach comes to a glorious climax on the final track, "Natural Born Leader," as arena-rock guitar and organ riffs provide an appropriately grandiose backdrop for the tape's closing mission statement. Many rappers are given to overblown claims and over-the-top production, but as those guitars wail and a choir rises behind him, it's not hard to believe the hype. With an album as varied, challenging, confident and downright fun as You're Fucking Out, Rockwell Knuckles stands tall as St. Louis' most capable and adventurous hip-hop artist. --Christian Schaeffer Homespun: April 21, 2011

It's been an eventful 2011 for twin sisters Hannah and Delia Rainey. As Dubb Nubb, they gained a permanent drummer in older sister Amanda, toured the South, played LouFest, recorded a Daytrotter.com session, and released their first full-fledged album - all before decamping to Mizzou for college. Following a couple of EP-length recordings, Sunrise Sleepy Eyed finds Dubb Nubb dramatically broadening its songwriting palette. Elegantly produced with violin, cello and percussion, but centered as usual around acoustic guitar and vocals, the Raineys harmonize about travels ("Tennessee Mountains," "Sunrise") family history ("Kindergarten Wedding"), heartbreak ("Gravestones") and their beloved St. Louis ("Mound City Baby"). Complex and mature, but never too serious or streamlined, Sunrise Sleepy Eyed is the best yet from this most unclassifiable family band.

Key Track: "Mound City Baby." An ode to St. Louis that rises and falls. At its climax, the music stops and Hannah and Delia declare, "My heart is a Mississippi river barge!" It sounds like a declaration of faith.

Place You're Most Likely to Hear the Artist : During the school year, in and around Columbia, often at DIY venues like the Hairhole and Diva Haus. Otherwise, in backyards, living rooms, parks, and occasional clubs locally and throughout the state. Next month they are undertaking a Missouri tour before returning to school.

The new indie-pop quartet Palace works best in twos: The band is made up of two men and two women, it employs two keyboardists, and lead vocal duties are shared between Matt Kavanagh and Jamie Finch. There's safety in numbers, and that helps the band make big-sounding songs out of a few simple parts. On the St. Louis music spectrum, Palace falls somewhere between the emotionally loaded shout-singing of the long-dormant Gentleman Auction House and the virginal nursery-rhyme indie rock of Scarlet Tanager. The singers' paired vocals -- which are often gleefully accompanied by drummer Danny Hill and keyboardist Sydney Scott -- recall the sing-songy stickiness of twee, though there's much more full-throated soul alongside the burbling keys and twinkly glockenspiel. It's a strong, confident first outing from a band that has both the pop smarts and the rock know-how to make these songs stand up instead of quickly deflating.

With an onslaught of handclaps, cooing harmonies and a cathedral's worth of clanging bells, opening cut "Summer Don't You Dare" may ensnare you with bright hooks and classic harmonies...or it may give you a caffeine headache. But Palace doesn't trade in subtleties (and its grandiose name just might elicit a cease-and-desist letter from Will Oldham and his Palace Songs/Brothers/Music monikers.) While big-hearted pop is the order of the day, the mood isn't always so effervescent, as the duet "Weight of the World" gives some tuneful gravitas to the eight-song disc. With the heavily reverberated guitars and low, distant drums knicked from the Walkmen, both Kavanagh and Finch give ever-escalating vocal performances. "Show and Tell" brings in some schoolyard clamps and stomps alongside Kavanagh's strident Freddie Mercuryisms, and the song's alternating waltz tempo and ska upticks recall a more loose-limbed Ra Ra Riot. That synthified, dance-punk vibe closes out the disc with the extended chorus of "Neighborhood Kid," which gives Finch another chance to showcase her vibrant vox. These eight songs show both a well-defined sound and a willingness to aptly tinker with a handful of genres. That's a good start for a young band. --Christian Schaeffer Homespun: October 20, 2011