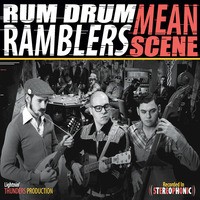 As you may have noticed, we were excited to be St. Louis music fans this year. And there is no more substantial document of the sound of this city in 2011 than the music released by its bands and artists. It is not an exaggeration to guess that the releases in the metro area number in the thousands, and while we did not hear every one, we heard a hell of a lot of them. So in an effort to jog the memory of existing fans and introduce some excellent music to others, we will be telling you about our favorite 40 St. Louis records of 2011 in no particular order.

The backward-glancing trio Rum Drum Ramblers is most commonly thought of as a blues band, and certainly, the young men in the group seek to revive a certain strand of acoustic, prewar blues music. But after listening to its second album, Mean Scene, one could argue that the Ramblers is a soul band; just listen for a few minutes to guitarist and singer Mat Wilson's sweet, husky voice and feel the easy rhythm of the best early R&B singers. Or perhaps it's best to describe it as a country act: There's so much twang-bangin' and swift-pickin' on "Nothin' New" that Buck Owens is probably tipping his ten-gallon hat to these fellows from the great beyond. But then, terming the Rum Drum Ramblers as country (or blues or soul) would ignore the jazzy underpinnings that Joey Glynn pumps out of his sonorous upright bass and the forceful blowing of its guest horn players. Better yet to put genre tags aside and let the Ramblers interpretation of American folk idioms fan you like a humid breeze.

It's easy to pair the Ramblers with the similarly styled Pokey LaFarge -- after all, Glynn and harmonica player Ryan Koenig make up two-thirds of LaFarge's South City Three. But where LaFarge is a passionate performer, he is never ruffled; his gentlemanly demeanor doesn't allow for it. The Ramblers don't mind if a little sawdust gets mixed in with its whiskey, and that looseness spreads a freewheeling flavor over the dozen tracks on Scene. Trash-can percussion and second-line horns adorn the lazy shuffle of "Get Behind the Wheel," and the electric fuzz of "All the Little Days" proves that the band doesn't play it straight even when plugged in. In fact, the only constant across these songs is that Wilson's intuitive guitar playing -- bluesy, jazzy, soulful and twangy -- is tough to pin down. He's a stylist who has ingested decades' worth of popular (and unpopular) music, and he and his equally flexible bandmates spit these influences back out in familiar but thrilling fashion. --Christian Schaeffer Homespun: March 10, 2011

We in St. Louis have always known that our pop-punk Humanoids were a first-rate band. With two albums, a few 7" and tons of touring under their belts, it was only a matter of time before our little treasure received national attention. Word-of-mouth recommendations reached Vinnie Fiorello of Less Than Jake and Fiorello now promotes the Humanoids on his label Paper and Plastick. The self-titled album came out this autumn and it was just in time-- we fans have been waiting for far too long to get a copy of songs that we've learned and loved from the high-energy live shows. The new album is offered to stream or download for free at freemusicfirst.org, and it's so good that you'll feel guilty for not having to pay for it.

Key Track: "Future Perfect"-- it's a song that you hear once and then you know it forever. And the catchy chorus makes it an instant sing-along hit.

Place You're Most Likely to Hear the Artist: The Silver Ballroom. At this South Side punk rock pinball bar the drinks are cheap, the owners/employees are amazing and the juke box is full of both punk classics and our favorite local bands.

Listen: You can stream (and download) the whole damn album for free here --Jamie Lees

2011 was the year that Old Lights coalesced into a capital-b Band after serving as a moniker for David Beeman's pop-savvy and dark-tinted songs. The four-piece is both lean and lush, constructing songs in which the ear-grabbing flourishes, be it synthesizer exorcisms or keening pedal steel guitar notes, never chip away at the melodic center. John Joern's drums serve both locomotive and ornamental purposes while Kit Hamon and Beth Bombara's sonic sweetening on bass, piano and vocal arrangement make these songs burst and bloom in all the right places. Like Strangers' set dressing may be perfectly pitched, but the production and musicianship only serves to draw the focus back towards Beeman's incisive and unflinching songwriting - he tackles different angles of emotional subterfuge on these six tracks, and no one comes out smelling rosy at the end of it. These are rough songs packaged in indie-pop finery; major chords and big choruses may soften the blow, but all that bubblegum just makes the songs and their broken-heart-on-a-ragged-sleeve lessons stick on your brain all the more.

Key Track: "All Noise," in which synths pulsate, pianos fall down stairwells, choirs croon and guitars are strummed into oblivion. Place You're Most Likely to Hear Old Lights: Off Broadway, El Lenador and in the band's recording facility, Native Sound.

If Alec Empire and the B-52's had a child, and that child required ADHD medication, you'd be left with noise-rock duo Volcanoes. Jon Ryan and Eric Peters can't tell if they're in a noise collective, a metal band or a jock-jam dance crew, and that musical schizophrenia pays dividends on the pair's debut Heavy Hands. Across eleven tracks and nearly 40 minutes, the band tries on mutated cheerleader chants ("Steel Plates Slicing Through My Every Thought"), paranoid psych-rock with reedy organ drones (the badass "My Face is Blood") and industrial bass pulses set against ho-hum lyrics ("Oil Rainbow"). Not everything sticks to the wall, but the disc gives a restless tour through two dudes' fixations on a few differing but intersecting genres.

Drummer and keyboardist Peters pushes his vocals above the din he and Ryan's bass and synth parts creates, though you're not listening to Volcanoes for the words -- you're here for the riffs. Some of these are true headbangers; others just run themselves against the wall in either a sort of tantric repetition or due to a dearth of good ideas. But this is pop music, no matter how fractured, noisy or pneumatic, so the songs rarely overstay their welcome. Closing cut "...And Then We Destroyed Each Other" may be the best in-the-wild moment for a band that's tough to pin down. The lead line has garage-punk balls and heavy-metal precision, and Peters' sneering, distorted vocals cut clean through the simple and hypnotic pattern, all before the song slows to a crawl in the final minute in a hail of cymbal crashes and synth squiggles. --Christian Schaeffer Homespun: October 27, 2011