RFT Music, in conjunction with Tangent Mind, set out to create a series of distinctly St. Louis videos featuring touring bands playing in our hometown. Someone Still Love You Boris Yeltsin is a fitting debut. The Springfield, Missouri band has drawn inspiration from its own hometown since the days in junior high when, as Philip Dickey says, "even just playing at the coffee shop down the street was the coolest and scariest thing." Now, the band has fans scattered around the world, and still SSLYBY held the release show for its most recent album, Tape Club, at a roller rink in Springfield. The $7 price of admission included skate rentals.

The video you see above features Dickey and Will Knauer in an acoustic performance of "Yr Broom," with Stephen Baier of Dots Not Feathers singing backup harmonies. The two also played "Yellow Missing Signs" in its first acoustic rendition. We'll have a clip of that next week. Below, you can read the complete interview from the shoot.

Kiernan Maletsky: Do you want to talk a little about the origins of Tape Club?

Will Knauer: We had a thing called tape club a few years ago where we would send out tapes to people and we didn't actually finish sending out all the tapes. And this, sort of, is our little thank you for them for being patient.

I think that idea makes even more sense now than it did before, maybe, because it's hard to get people to buy records, but, "Oh, you could join this club..."

Philip Dickey: I kind of wish we were still doing it in a way, because yeah, there's something nice about not waiting two years for a band you like to put a new thing. You're interacting with them.

In a way I think that's what blogs do is just a weekly, a daily, thing where it's just something new.

The community thing, having something for people to participate in and interact with is more of a thing...

Dickey: Yeah. The more you do stuff like that...you actually could be someone's favorite band because there's a lot more to liking a band than liking one album. It's knowing them and learning about them and having more stuff. And in that process I think the band is kind of beside the point. It's not even us. It is the stuff we do, and it's not even the ego thing. It's just music.

Dickey: Or an audience outside of who was watching you at that moment. Other villages wouldn't know about it. It was just the people, being with them. That's one thing about being a pretty obscure band is that it is more the village thing. We go to cities and there are about 20 or 40 people who know about it. And it is more like a close-knit thing instead of a huge...part of that is we just never really got popular.

I suppose it's all relative.

Dickey: Yeah, yeah. When we were in junior high, imagining playing anywhere outside...even just playing at the coffee shop down the street was the coolest and scariest thing. And then to be able to do it somewhere else in another small room...that's awesome. Do you feel like you have more flexibility with Tape Club because it's not a conventional release?

Dickey: Yeah, in a way. The Tape Club tour is different because normally when a new band does a tour, you have to listen to them play all their new songs, and you kind of like the other album better. But Tape Club is kind of like our whole career, so it's a little bit of everything. That's kind of nice. Our whole set is just spread out.

Knauer: I think it's really interesting. I didn't feel nearly the amount of pressure that went into Let it Sway, and then Tape Club I feel like it's doing just as well, or getting all the same press. It's weird...what part of the process we need to realize is more important in getting a record ready. It was nice. It felt a lot more laid back.

Dickey: It's like, for Tape Club, now we're getting to let it sway, on this release.

The house on the cover of Tape Club: I'm sure it's got some significance.

Dickey: It's kind of a trick, actually.

Knauer: A little known fact is a different house than we recorded Broom in. That's actually the house the photographer lived in, which is right around the corner. And is similar architecture.

Dickey: I kind of figured it would look super homemade and like that's where we recorded all our songs. It was definitely a trick. But really what happened...his yard is a jungle. He had a satellite fall on his roof three years ago and it's just hanging there. And we were like, "Well, let's do some pictures next to the broken satellite and it will mean something." 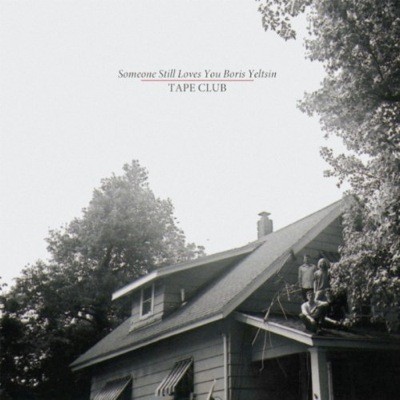