New Year's Eve in St. Louis: Ten Best Things to Do Under $10 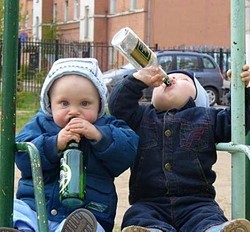 The best part of New Year's Eve is getting ready for it. The worst part is usually right around 11:57pm, when it dawns that you just blew a couple hundred dollars to end up chugging pink Andre curbside while your best friend blows chunks in an obliging hedge/alleyway. Of course, that lamentable realization will wait until the actual night, right now is all about PLANNING and EXPECTATIONS and HAVING THE MOST FUN EVER. We've got a rundown of your parties, shows and ultra-luxe celebrations, arranged by price point. Attention, frugal fun-seekers, this post is for you.

Kentucky Knife Fight and the Blind Eyes at Off Broadway Bills: Zero of them. Thrills: Live sets from an all-star cast of Off Broadway familiars: Kentucky Knife Fight, The Blind Eyes and Dino's House band, as well as a DJ set by RFT writer Christian Schaeffer, Esq. Special appearances from Cassie Morgan, Beth Bombara, Nee and Old Lights. Swills: Co-sponsored by New Belgium, there will be bubbly libations available. 8pm.

London Calling's Arctic White Out at the Gramophone Bills: $10 advance, $15 at the door. Thrills: London Calling maestros Clockwork and Nick O, with Trash Talk, Drace and a live set from Palace. Swills: No champagne, but guests are encouraged to dress like polar bears. 10:30 p.m.

First Night St. Louis--Xanadu Bills: $10 for adults, $5 for kids six to twelve and free for five and under. Thrills: A city-wide celebration inspired by Xanadu, yes, that Xanadu. It's the 20th anniversary of First Night in St. Louis, and it's 10th year in Grand Center. Puppet shows, Polynesian dance, hypnotists, live music from Funky Butt Brass Band, old-timey strings from Mound City Slickers, and scores of family-friendly activities, performances and assorted merriment. Swills: No drinking in front of the kiddos. 6pm. The Union Electric at CBGB Bills: None. Free! Thrills: The UE with This City of Takers and Middle Class Fashion. Swills: All the Stag your little heart desires. 10pm.