I am 24 years old. When I was twelve years old, and Napster was a real thing and not a horrifying tale RIAA parents told their RIAA children to get them to clean their plate, I was briefly under the delusion that the 1980s were the single greatest decade in the history of music, and that the 1990s were an unmitigated disaster that was Killing Popular Music Forever. I'd never had a way of listening all the way through tracks I'd only had the chance to hear in Time-Life compilation ads, and apparently I was much more into "Turning Japanese" than I had any right to be.

So I sympathize with the twelve-year-old typing "Press like if you think the '90s are the BEST rock and roll!!! No Bieber right!!!" into the comment box beneath the super hard Candlebox song he just found. But someone needs to tell him, and you, if you happen to actually be twelve years old and reading the RFT: The decade you are fetishizing at the expense of your own generation's music still sucked. I'm sorry.

Look, when I was twelve I wanted to live inside this music video:

The absurd, unselfconscious special effects, the new wave geek-fashion, the campy, pleasant theater, the colors, Elliot Easton's perfect guitar tone--to a twelve-year-old who didn't feel nearly angry or hopeless enough to enjoy Pearl Jam and the various sub-Pearl-Jams of post-grunge in the moments before that first Strokes album it was everything the music on the local KISS-FM station refused to be for me. I still wouldn't turn an invitation inside the video down, so long as I wasn't the one being stalked by Ric Ocasek.

So I get it. When you find music on your own you're able to find the things the radio isn't giving you, and it feels more real and vital for all that. But the moment you turn the 1990s into a Bieberless utopia where all the girls looked and talked like Winona Ryder you're setting yourself up for real disappointment. I know I'm going to get some YouTube thumbs down for this, but it's for the best--here's what you're lucky enough to have avoided in that utopian decade before you were born, whichever decade it is.

1960s: The Beach Boys are awesome, the Beatles are awesome, the Rolling Stones, hey, sure. Looking back on the 1960s now there's a nearly endless supply of experimental records flowing out of rock and roll's sudden establishment as a dominant popular and artistic medium. 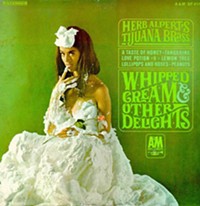 Justin Bieber might not have been born. Justin Bieber's mom might not have been born, either, for all I know. But in 1966--that's the year Pet Sounds came out--the best-selling album in America was by Herb Alpert and the Tijuana Brass. Its single-entendre title was Whipped Cream & Other Delights, and get it? This woman has whipped cream on her boobs!

In 1967, the year of Sgt. Pepper, the best-selling album in America was by The Monkees. Yes, I love "Daydream Believer" and "I'm A Believer" too. But if you're worried about artificiality in today's synthesizer-and-bullhorn Europop garbage, my 12-year-old friend, consider yesterday's Europop garbage: The best-selling album in the year of the Beatles' most brilliant and world-changing album was by a band created expressly to copy to Beatles.

Imagine people still listened to rock music. Now, imagine the best-selling album of the last year was called Towns, by The Schmarcade Schmire. That's the 1960s. People were shameless--those shameless, rich people are now dead, and their shameless, terrible music buried deeper in YouTube than you're likely to find it, but all of it existed.

1970s: Look, I have no sympathy for you. This was the ugliest decade in human history, anything you remember as substantive or deep has grown preachy and awful with age, and the music was a kind of rapidly congealing sludge that vaguely resembled the end of the 1960s, and I already lived through this revival in the 1990s and I'm not about to do it again. If you love this decade, you can deal with your own terrible, sensitive realization of youthful folly and naiveté. Call me back when they discover uglier colors than Brown Yellow and Brown-Yellow Orange.

1980s: Musicians of the 1980s reacted to all of that by being, at least at their best, very bright and sharp and new-sounding. But oh, poor 12-year-old, there's so much you will never have the misfortune of hearing and seeing from the 1980s.

Worse or better still, you have the benefit of seeing even the worst stuff of the decade through the corrective lens of easy irony. Yes, Teen Wolf is hilarious now, but the things you hate will be equally hilarious to your children. People in the 1980s had to live through all of that earnestly. And they were much less likely to have cable, so if Alf was terrible and popular for a decade they were stuck watching Alf.

More directly to the point, there were the New Kids on the Block, and they were eventually action figures and matinee idols and everything, 12-year-old, that you hate about Justin Bieber, and there were five of them. Say what you will about Justin Bieber, but one clear sign of the progress we've made in the last 25 years is that rich white teenagers are much better at assimilating urban music and dance moves than they were in 1988:

1990-2005: [Read this whole section in Eddie Vedder's voice, because everybody else was doing it anyway.]

People sometimes wonder why I'm willing to entertain those conspiracy theorists who believe Kurt Cobain was murdered, and my explanation is this: It's plausible to me that the first person who heard Puddle of Mudd perform "She Hates Me," in a desperate attempt to cut off the post-grunge movement before it began, went back in time and murdered him.

They were too late. As a mostly unrepentant Weezer fan I'm glad guitarists in the 1990s rediscovered the heavy, distorted tone that's characterized alternative (read: radio) rock ever since. But when I see you, twelve-year-old YouTube commenter, begging to see more emotion in Today's Music like you see in that Seven Mary Three video you just found, my heart breaks. It breaks like a, like a really loud, sludgy guitar that plays the same note over and over while somebody with blond highlights and a hemp necklace growls about his heart breaking.

This one I can do first hand, twelve-year-old YouTube commenter: We had our Justin Biebers. Watch ten minutes of Spice World, and don't click the thumb-up on the commenter who says, "This movie reminds of the '90s, a time much simpler, more innocent and more fun."

But we also had more of this loud, plodding post-grunge than I could ever give away to the 238 thumbers-up who all think "All Music Should Be Like This Today!!!!", who are ready to tell everyone who will listen that they don't listen to crap like all their classmates do now because they have Collective Soul. For every Pearl Jam--even for every competent, hooky Matchbox 20, there were a million one-minor-hit acts with interchangeable lead singers that made the entire decade unbearable to live through, if you were looking for them.

So don't look for them. Forget about LMFAO, instead of rushing to dislike their new song, and eventually they will be poor and forgotten and all will be right with the world. Try to see 2011 like you see 1999, or 1984, or whichever year looks perfect on your YouTube playlist, twelve-year-old YouTube commenter, and those two or three great contemporary bands you discover will feel that much more unique and important to you. Nearly as unique and important, I'm willing to risk, as Candlebox or The Vapors.