Ike Turner, Who Died Four Years Ago This Week, Left A Turbulent Legacy 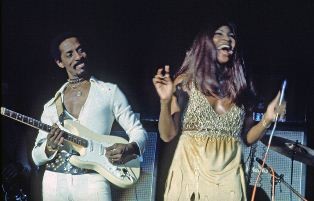 Musicians aren't saints. For every selfless and untainted individual in the music universe, there are at least a thousand others with notable -- and often-massive -- flaws.

More often than not, that's not a bad thing. Musicians often convert bad experiences into auditory gold. Conflict provides musicians with a dose of humanity, proving that they're not just a disembodied voice through stereo. But someone Ike Turner -- who died four years ago this week -- presents a complicated challenge for those who love and appreciate music.

For the most part, Turner's musical credentials are impeccable. He's a member of the Rock and Roll Hall of Fame with ex-wife Tina Turner. Two songs he performed with her - "River Deep/Mountain High" and "Proud Mary" -- are in the Grammy Hall of Fame. And he contributed to "Rocket 88," which is considered one of the first rock n' roll songs.

To boot, Turner is one of more famous musicians from the St. Louis area. While he was born in Mississippi, Turner and the Kings of Rhythm became a fixture throughout the area in the 1950s. His contributions to St. Louis culture was rewarded in 2001 with an induction in the St. Louis Walk of Fame.

But Turner's musical contributions are relentlessly overshadowed by his personal life. His rocky relationship with Tina Turner -- showcased in the popular film What's Love Got to Do With It -- made the name "Ike Turner" synonymous with wife-beating. Turner was also heavily addicted to drugs, even missing his induction into the Rock and Roll Hall of Fame because he was serving a jail sentence for trying to sell cocaine.

Turner often brings up the question of whether it's possible to separate somebody's personal life from their music. That struggle was on full display a few months before his death from an accidental cocaine overdose.

St. Louis Mayor Francis Slay in 2007 refused to sign a proclamation for "Ike Turner Day," stating that "it is for his troubled history as an abusive spouse that most younger people know him"

"To my knowledge, he has never expressed any remorse for that past nor made any amends. And, that's too bad," Slay wrote on his blog. "A person of his stature in the music and entertainment world would be a powerful voice calling attention to the issues of domestic and family violence."

Slay may have had a point. Turner didn't exactly come off as sympathetic in a 1985 Spin Magazine interview:

One time I got pissed off about something I read. I wrote her a letter. "Why don't you talk about you and stop talking about me and the kids." I told her she was hurting the kids and embarrassing them. The boys had nothing to do with us.

But it's years ago that I had a temper. I don't regret nothing I've ever done, absolutely nothing, man, because it took all of that to make me what I am today - and I love me today. I really do. Yeah, I hit her, but I didn't hit her more than the average guy beats his wife. The truth is, our life was no different from the guy next door's. It's been exaggerated. People buy bad news, dirty news. If she says I abused her, maybe I did.

Things began to stabilize when rap divas Salt n' Pepa sampled "I'm Blue (The Gong Gong Song)" for its hit single "Shoop." The New York Times noted that landed Ike Turner with a half-million dollars in royalties, and allowed him to procure a golden Mercedes. He also collaborated with the digital supergroup Gorillaz on the track "Every Planet We Reach is Dead."

Turner fostered a niche focusing on blues music. In addition to touring extensively, Turner released several critically acclaimed albums. In 2001, he released Here and Now - which was nominated for a Grammy. His 2006 release Risin' with the Blues won the coveted gilded gramophone.

Still, it will continue to be difficult -- if not impossible -- to separate Turner's personal and professional life. That's especially the case when he often didn't show a lot of remorse for his actions.

Moreover, popular music and the people who create it never exist in a vacuum, as performers' actions are a continual source of fascination and ridicule. Ultimately, it will be up to the listener to decide whether Turner's musical gifts are powerful enough to overcome for his profoundly troubling misdeeds. And for the most part, music lovers are still struggling with the choice.