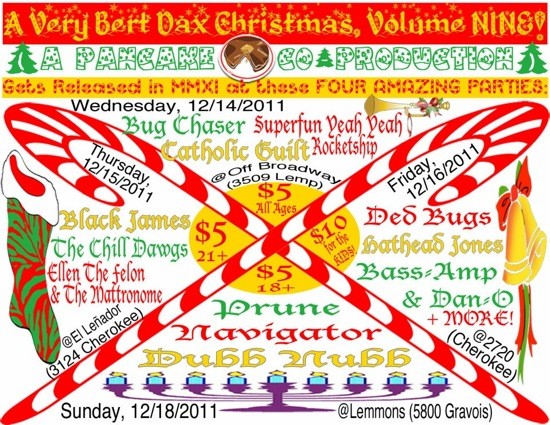 A Very Bert Dax Christmas, Volume Nine has now officially been released. The ninth annual X-Mas compilation, a joint release by Rob Severson from Pancake Productions (subject of this week's music feature) and Matt Harnish of The Bert Dax Calvacade of Stars, features a pool of truly diverse local artists. These are cover songs and original tunes, all inspired by the wintry holiday season. Year after year, this compilation has proven to showcase an eclectic mix of St. Louis music through love for holiday jams. The compilation will get a series of four release shows, starting this Wednesday at Off Broadway.

Producer Rob Severson was kind enough to provide us with the full compilation. Over the next week, we'll preview the compilation two tracks at a time, with Severson's commentary as well as our own, expanding beyond the songs to talk about the artists involved.

"Satan Baby" by Ellen the Felon and the Mattronome

Severson: This one was recorded live at KDHX last year. Ellen preferred to use this version over the studio version she recorded for her Christmas EP. I am a little disappointed that the extreme glockenspiel on the studio version is not present here, but it's a great cut because it presents a funny take on a classic X-Mas pop song, and is a sweet showcase of Ellen's talents as performer and consummate entertainer.

Hess: "Satan Baby" pops, especially coming after "Winter Planet." This live cut shows the same personality you'd be subject to at a live Ellen the Felon performance. The Mattronome always crafts interesting but appropriately written drum parts. Ellen's banter is a highlight, a treat you wouldn't otherwise have in a studio-recording. "The Night Santa Went Crazy" by Hathead Jones

Severson: Dan Kelley (drummer for Bass-Amp & Dan-O) provided this reasonably straight-forward version of the twisted "Weird Al" Yankovic original -- he was excited to be a part of the Daxmas family, and takes his X-Mas music seriously. I love the sampling of the movie DIRTY WORK during the breakdown in the middle, and if you're at all familiar with the Weird Al version, you'll notice that where Al kept Santa alive and just sentenced him to prison for 700 years, Hathead Jones ends his life swiftly and mercifully.

Hess: I admit, I like Dan Kelley's voice a lot more than Weird Al's. Not that I dislike Weird Al, there's just something about his voice. This twisted song is presented with such a friendly, lovable sound. The DIRTY WORK sample ruins that friendly tone half way through and provides a stark, comedic contrast. Weird Al might have been scared to off Santa. This is a man who is magical enough to shape-shift and slide down chimneys, who knows what other wizardry he has hidden up his wooly crimson sleeve?