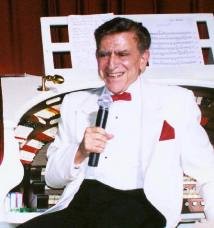 For most part, people in the entertainment business become famous by harnessing a single skill. They achieve notoriety through singing, dancing, acting, spoon-playing or saxophoning.

But then, there are those remarkable folks who become famous on multiple fronts. Stan Kann - a St. Louis native who was born on this day in 1924 - could fit into this category. Kann became nationally known for his quirky appearances on talk shows, and also established a legendary reputation in St. Louis for his mastery of the organ.

After studying the instrument at Washington University, Kann went onto become a renowned concert organist at the Fabulous Fox Theater. From 1953 to 1975, Kann played the Midtown theater's Wurlitzer pipe organ between movies and special events.

Kann's run as an organist was probably enough to catapult him into his own section of musical immortality. His performances were broadcast nationally on NBC from 1964 to 1975. And he was inducted into the American Theater Organ Society in 1999.

Yet Kann managed to carve out another niche through his appearances on The Tonight Show with Johnny Carson, the Mike Douglas Show and the Merv Griffin Show. But he didn't appear on those programs to showcase his tremendous organ-playing ability. Rather, he served as a comedic talent who showcased odd gadgets - particularly vacuum cleaners.

Kann - who died in 2008 - had a particularly large collection of often-strange cleaning devices. A Los Angeles Times obituary notes that Kann became interested in vacuums at an early age "mainly because his cash-strapped parents didn't have one." When he met comedian Phyllis Diller on the St. Louis-based Charlotte Peters Show, Kann showed her his vast array of vacuums. Kann told the Associated Press that after that, Diller said 'I'm going to call the Carson show, 'cause you're nuts.' "

More from the LA Times obituary:

Although Kann was best known in his native St. Louis for playing the Wurlitzer pipe organ at the city's Fabulous Fox Theatre, he began acquiring a national television audience on June 8, 1966, when he first appeared with Carson on "The Tonight Show." He showed up with a few prized items from his collection of carpet sweepers that numbered 150.

Years later, Kann recalled disaster striking in that first appearance: Parts began to fall off his vacuum cleaners at inopportune moments when he was demonstrating them. Carson made the most of the moment. The results were hilarious.

"The stagehands put the wrong handles on several of the machines," Kann told the St. Louis Post Dispatch a few years ago. "I planned on showing the vacuums as a kind of historical demonstration. I had no idea what it would turn into."

Besides the aforementioned talk shows, The Fox's website says Kann appeared on Hee Haw, Gimme a Break and The Two of Us.

Eventually, Kann made his way back to the Fox Theater in the late 1990s, playing the Wurlitzer for the historic theater's tour groups. In addition to his hall of fame designation, the ATOS named Kann Organist of the Year in 2003.

While we're on the subject of multi-modal entertainers, here are a few other folks who managed to excel in multiple spheres:

Jared Leto: The Louisiana native has had a versatile acting career, including a memorable turn in American Pyscho as the dude who was brutally murdered while "Hip to be Square" was playing in the background. But Leto also broke through in the world of music with his band 30 Seconds to Mars.

Frank Sinatra: Sorry Denzel Washington, but I sometimes pretend that your remake of The Manchurian Candidate never happened. And it's not just because that film was terrible. Rather, the original - which starred the international singing legend - is one of greatest films of all time. Sinatra, of course, acted in a number of high-profile films through his long career.

Kay Thompson: As I noted earlier this year, the St. Louis icon was involved in every entertainment-related activity in the universe. Thompson sang, danced, acted and worked behind the scenes, as evidenced by her nearly endless resume.

Cedric the Entertainer: It's probably not surprising that somebody with the word "entertainer" in his name made moves in different realms of performance. The Missouri native became famous in the world of stand-up comedy, as well in movies and television shows. Lately, he's taken a turn as the host of a game show on NBC called It's Worth What?

Chris Rock: Rock's career seems to have some similarities to Kann, although somewhat in reverse. He of course gained fame from his stint on Saturday Night Live and a cavalcade of movies. But he also found some success as a recording artist, recording satirical jams such as "Champagne" and "No Sex (In The Champagne Room)." He also had an amusing cameo on Kanye West's Album of the Year nominated My Beautiful Dark Twisted Family. Sure, Rock isn't a master organist, but he does do a mean impression of Tiger Woods.