We Allege Peter Frampton Overdubbed; He Alleges We're Talking Out Of Our Asses 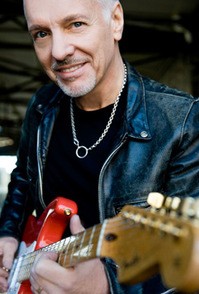 Say what you will about Peter Frampton, but do not accuse him of apathy. Or, as we learned yesterday, of overdubbing.

The iconic English rocker called the RFT offices yesterday because he took exception to a line in our piece Peter Frampton Comes Alive! in St. Louis: Five Other Albums That Should Be Taken On Tour, where writer Dan Moore made the following joke: "Peter Frampton is going to play the iconic Frampton Comes Alive! in its entirety in St. Louis, part of a 35th Anniversary tour that will see the 1970s rocker play his classic live double-album in its entirety for the first time since that time he went into the studio and overdubbed all the live parts shortly before its release."

Dan meant to exaggerate -- neither he nor I ever believed the album was entirely re-recorded in the studio. However, we did believe that some substantial overdub work was done on the original release, based on comments by people like producer and engineer Chuck Ainlay, who worked with Frampton on the 25th Anniversary re-mastering of Comes Alive! and talked about studio tracks that appeared on the original record. But, as Frampton explained to us yesterday, overdubbing was only used to replace audio that failed to come through the live recording for technical reasons such as misplaced microphones.

"The rule that we made was if it makes it to the tape, it stays," says Frampton. "Absolute truth. I've been battling this for 35 years. And when I see something that flippant, you understand why I put my back up."

Our full conversation, below.

Peter Frampton: First of all I thought it was a little snide. He put that we're coming into town, and doing this, but he'd prefer really not to see me, he'd prefer to see other people. So it was a bit of a backhanded compliment in the first place. But I guess what journalism has come to these days. Do you agree?

Kiernan Maletsky: I think his intent was not to deride your tour at all, but rather to just offer another take on a show announcement and offer a fun, joke sort of list about other tours. I don't think it was meant as an instead-of situation.

OK. Well with him saying that everything was replaced, he's talking out of his ass, basically.

I'll tell you exactly what happened when we mixed the live album, so there are no if, but, where or what. This was the rule that I had when we made Frampton Comes Alive!, being known as a live performer, I'm not going to go into the studio and overdub. If you want to say that, say that about Kiss Alive, because they borrowed my guitars and my amps to do those overdubs.

So let's get things straight here: In those days, technology was not as it is today. It just wasn't as technical. We've come a long way, obviously. So unfortunately, on a couple of the tracks, only, some instruments were not recorded because there was crackling on the tape or the assistant or the guitar tech didn't move a mic. The number of times that anything is overdubbed on Frampton Comes Alive!... the rule was, if it didn't make it to the tape, then we can redo it because it needs to be done. If it made it to the tape, and it sounds good, we leave it. So nothing was overdubbed on that album at all that wasn't absolutely necessary. Like: On "[I Wanna] Go to the Sun," the piano only was crackling and was intermittent. Bob Mayo had to replace the piano. On "Show Me the Way," my guitar tech did not move the mic from one amp to another for the clean sound on the rhythm of "Show Me the Way," and I had to replace the electric guitar rhythm. That is about it.

And we tried other overdubs, but we didn't use them because it sounded bad. It didn't sound live. We let the mistakes in. If I wanted to have my voice be perfect and in tune, I would have re-sung the whole album. But I didn't. Because it wouldn't be live. And there are some really bad notes that I sing. There's some out of tune guitar notes that I play, as well. But when you have the audience mics as loud as I had them in the mix on that album, there's no way you can replace anything, lead-wise or vocal-wise because it won't match the audience. Therefore the proof is in listening to the album, and you can hear if anything is overdubbed and it's not.

So Chuck [Ainlay] is just talking about equipment malfunctions? There are absolutely no...

Exactly. The only overdub or replacement of anything that I did with Chuck Ainlay was because we were doing the 25th anniversary - we were remixing everything. We wanted to add the two tracks or three tracks that didn't make it on the original that wouldn't fit because of vinyl time. Now with CDs we had more time per CD. So we added "White Sugar," which nothing was replaced, and we added "Just This Time of Year," which is an acoustic song that I did. And I sang one word wrong in the bridge so that it didn't rhyme. That really bugged me, because it didn't make sense. So we went in and I re-sang that word and I replayed the chord of the one guitar underneath it. That's it. These were so small, the things we did, and he makes it sound like I went in, kept the audience, and played everything again and that is just absolutely... I can't have people thinking that. I'm very passionate about my live album and how important it was to me. I want the truth to be known, and I can't have people saying stupid things like that when they have not a clue.

I think he was responding to certain comments from people who worked on versions of the album. And clearly there's a miscommunication somewhere along the line about certain parts getting overdubbed. This must be a battle you fight a lot, because there are lots and lots of places where people say that it was overdubbed for large sections. A lot of people assume it was, yes. But it was not! And that's why it has the magic it has is because all the mistakes are left in. You can't replace a guitar solo, and you can't replace a lead vocal, because you'll hear it.

At the time, you were sort of alone among your peers, or if not alone then somewhat of a rarity, because a lot of the live albums from that era were very overdubbed. Is it true that you were doing something different?

You see I'd already cut my teeth on Rockin' the Fillmore, where not one thing was overdubbed. We didn't touch it. We took it as it was, and everything did make it to the analog on that one. We were lucky, very lucky. And that was five years earlier than Comes Alive!.

I couldn't live with myself [laughs] if I replaced anything on Comes Alive! or any live album that just wasn't there. It's not replacing it - we put it on because it wasn't there.

I do want to say that our writer was making an exaggerated joke. He knows it's not the case that every track on Frampton Comes Alive! was overdubbed, and I realize in retrospect that joke might not have been communicated well, and I apologize for the miscommunication related to that.

He and I both genuinely thought there were parts that were overdubbed, so I'm glad that you called and explained what happened.

The rule that we made was if it makes it to the tape, it stays. Absolute truth. I've been battling this for 35 years. And when I see something that flippant, you understand why I put my back up.