Peter Frampton Comes Alive! in St. Louis: Five Other Albums That Should Be Taken On Tour 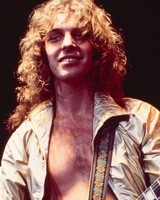 Classic rock fans, recently empty-nested mothers, and talkbox enthusiasts take note: Peter Frampton is going to play the iconic Frampton Comes Alive! in its entirety in St. Louis, part of a 35th Anniversary tour that will see the 1970s rocker play his classic live double-album in its entirety for the first time since that time he went into the studio and overdubbed all the live parts shortly before its release. The show is on March 30th at the Peabody Opera House (14th St. and Market Street, 314-241-1888)

Ed: Peter Frampton contacted RFT Music to clarify that he did not, in fact, overdub Frampton Comes Alive! Please see our interview with him for a full explanation.

Don't get me wrong, baby, I'm okay with Peter Frampton's way, most days. But seeing this -- along with Weezer's now-ubiquitous Memories Tour, which will in the next month be taking place on a very large boat -- makes me yearn for yet more single-album novelty tours. Like the following:

I'm not saying I was disappointed when No Doubt released the excessively poppy, trend-hopping Rock Steady in 2001--only that the day his preorder finally arrived a certain 14-year-old rock/ska fan in the St. Louis area tore down his Tragic Kingdom poster, stopped pretending he liked Return of Saturn, and swore on a copy of their first album that he'd find a new favorite band or die trying.

No Doubt's back on tour now, with plans for a new album that have been nebulous since 2009--a tour on the back of their 20-million-selling 1995 album would be a fine way to grab the spotlight ahead of its release, though it might not be enough to soothe the sense of betrayal I, uh, my friend felt the first time he heard "Hey Baby."

I'm not saying I actually want this to happen--just that if it did, we would be most of the way toward successfully recreating 1999. Sub-list:

3. Boyz II Men--II Availability: Questionable Skip: That awkward moment when your seven-year-old daughter who begged for the album plays a slow jam called "I'll Make Love to You" over and over.

Guys, I left my copy of II on the windowsill next to my potted plants for a few days, and when I came back for it was just by some band called Men--is that normal? 2. Creed--Human Clay Availability: You know what? I'm not even going to check Skip: The moment you said to yourself, "Yeah, I'll buy Human Clay."

"Those who cannot remember the past are condemned to repeat it." - George Santayana, years after buying Human Clay, when his buddy asked him if he liked those super-earnest Nickelback guys.

There are a lot of reasons it's sad that John Lennon and George Harrison (and the original Paul McCartney) (and, confusingly enough, the first fake Paul McCartney, who was responsible for "Say Say Say" but not "The Girl is Mine") are dead, but the saddest might be this: That the Beatles, who would by now be forsaking billions of dollars to avoid a reunion, aren't around to troll the music industry.

Imagine it: A huge press conference, weeks of rumors, and an announcement that the Beatles are coming back to tour--but they refuse to play anything but both sides of Beatles for Sale. Creed is the opening act, performing Sgt. Pepper's Lonely Hearts Club Band in its entirety.

Related: We Allege Peter Frampton Overdubbed; He Alleges We're Talking Out Of Our Asses.