Why is John Prine so beloved? He's never had a major hit of his own, never really crossed over from the folkie netherworlds, never, as a touring musician, done much more than simply stand with his acoustic guitar and pick and sing. At 65, the former mailman and army vet has all the sex appeal of a graying squirrel hoarding away nuts and seeds in puffy pink cheeks. He has two good musicians backing him but he doesn't need them.

Still, on a dreary winter night at the Touhill Performing Arts Center he earned the love of a near-capacity crowd. Prine played for over two hours, 25 songs in all, and could have gone 25 more.

The audience itself was a thing of wonder. Standing in stupid-long lines for drinks at intermission -- one bartender and one cashier couldn't handle them -- the grandpas and grandmas, the fellow vets and fellow stoners, the stray hippie kids and curious art students, the collective St. Louis assembly of the NORML mailing list, were happy, simply and genuinely happy. They didn't care if they wouldn't get their drink on; they couldn't take them inside the theatre anyway.

"This song was built to make you feel good," Prine said before playing "Fish and Whistle." "I hope it does its job." It did, and so somehow did even the saddest of his masterpieces, "Sam Stone," "Sabu Visits the Twin Cities Alone" and "Hello in There."

Opening up the night at 8 p.m. sharp was Jason Isbell, formerly of Drive-By Truckers, but now very much his own man. He's an excellent fit for this tour: A sparkling picker and storyteller, Isbell joked that he was a "white guy with an acoustic guitar, so maybe you'll like hearing what I have to say." He focused on solo material, three songs from the 2011 album Here We Rest, three from other solo records, and only two Truckers-era songs, "Goddamn Lonely Love" and "Outfit." He was clearly making new fans this evening, singing and playing hard and freely, delivering the heartbreaking fallen soldier story "Dress Blues" and tossing off one-liners like "I don't know what the Alabama state motto is. What's Latin for 'Look at the gun in my truck'?" The queue at the merch table for his signature wound up longer than the booze line.

Stuffed like a stocky salciccia into a navy suit with a pink tie, Prine seemed as if he could barely make his way across the stage, let alone move in time to his rhythms. But move he did, engaging young guitarist Jason Wilber -- who merited the applause for his Telecaster slide work -- and veteran bassist David Jacques -- who has worked with every other major songwriter in Nashville, from Patty Griffin to Shelby Lynne to Lucinda Williams to Steve Forbert -- as he pushed into up-tempo openers "Spanish Pipedream" and "Picture Show." The rhythms lurched about; that's what happens when Prine kicks off the songs sans drummer.

But who could care when he was digging deep into his catalog -- verging at this point on Dylan territory -- for "Humidity Built the Snowman" and "Six O'Clock News" -- during which, on cue, a baby wailed out during the line "changing all them diapers, polish all that chrome" -- and especially "Storm Windows," one of the least heralded of his major songs, and this evening given a gorgeous, ascendant arrangement.

Back in his pre-cancer-survival days, Prine would move from center stage to a back-of-the-stage table, lit by candles and scattered with guitar picks and cigarettes. He'd take a drag between songs and then return to the spotlight. He still has that ritual, sans smoking, of darting away between songs, just to sip on water, and collect his thoughts. He barely spoke between numbers, just enough to show he cared: "Souvenirs" was dedicated to old friend and co-songwriter Steve Goodman, who played the guitar so well that "the good parts sounded like I was playing them." He was saving his voice, which still has that wry, Midwestern everyman tone, but which now crackles like a newspaper in a fireplace. His finger-picking is clean and warm and mostly precise. Even if most of the tunes of his greatest sing-alongs might look the same on paper, he's always accenting just the right notes to drive the melodies home. "Christmas in Prison" and "Angel From Montgomery" -- with a lovely mandolin part from Wilber -- and "Bruised Orange" (Chain of Sorrow)," which Prine said he hadn't played in a while, were vulnerable and sweet and full of the wisdom he's always known how to communicate, truly communicate, without trying.

Finally, towards the end of the set, he turned to the song I most wanted to hear: "Mexican Home," found originally on Prine's third album, Sweet Revenge, the tune was best captured on one of the great live albums in popular music, John Prine Live from 1998. It's a song about the nature of time, like so many of Prine's songs, and learning to live quietly and humanely with "matters of life and death." The scene is set in a sweltering south of the border town -- perhaps Prine was acknowledging the stifling heat of the Touhill theatre -- and the images are beautiful: "Heat lightning burnt the sky like alcohol" and "the air is as still as the throttle of a funeral train." Prine delivered them with his signature casual ease, as if the lines just occurred to him the way weather and time occur. The poetry just happens, it would seem, and he just happens to be lucky enough to still be around to share it with others. 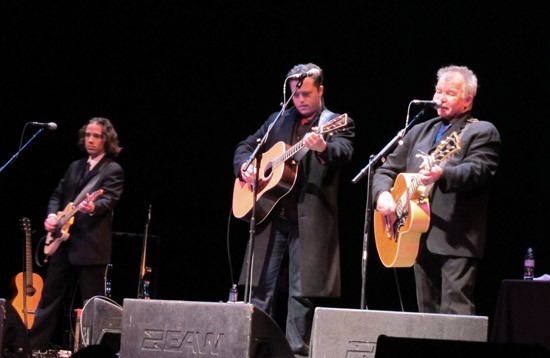 By the end of the long night, his voice was beginning to fray, but he gave a requested "Lake Marie" his best, though his pipes could barely handle the most dynamic lines. Back for an encore, he and his band had fun with "I Saw Mommy Kissing Santa Claus" and then invited Jason Isbell out to share in "Paradise," which seemed to surprise the Alabama kid; he pulled it off with delightfully jazzy solos.

Prine beamed. He knows his songs have held up, like their writer, against conventional odds.

Notes and setlists on the next page

Personal Bias: I'm old but I wasn't a teenager in the '70s; I never rolled a joint on Prine's first album. But, as the story has been handed down, my father courted my stepmother by taking her to early John Prine shows in Chicago. Or maybe it wasn't courting, but testing: Never marry someone who doesn't love at least one John Prine song.

Overheard: A couple on the rainy smoking deck: "Someday we'll have to go to the moon to smoke a cigarette." "Maybe, but I bet we'll be able to smoke joints there." A random dude interrupted by singing the whole of "Yes, I Guess, They Oughta Name A Drink After You."