A Hole in the World: Thursday Calls it Quits 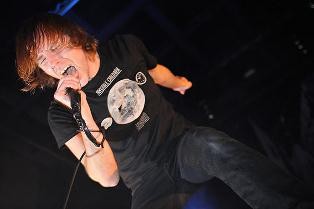 Thursday may have been the next big thing in rock music. But at a 2009 show at the Pageant, they were an afterthought

Those 23 words may seem hyperbolic. After all, how many times has some dorky music "expert" declared some rock band "the next big thing?" But Thursday was literally declared one of "the next big things" when Spin Magazine put lead singer Geoff Rickly on their cover in 2004.

At the time, the designation seemed apt. The New Brunswick outfit's album War All Time debuted at number seven on the Billboard 200. Their prior album, Full Collapse, had become a paramount example of "screamo" - which blended the fast-paced violence and melodic professionalism of post-hardcore music with, well, screaming.

But nearly seven years after that issue hit newsstands, Thursday is soon to be no more. The band put out a statement in November announcing its indefinite hiatus, saying "despite the fantastic year that the band has enjoyed, creatively, things haven't been as easy for us on a personal level."

Full disclosure: I'm a huge fan of Thursday. I've seen them in concert at least five times. I regularly wear the band's brown t-shirt. And I've managed to withstand insults from some friends who don't particularly care for the band.

But even I can take off my Thursday-colored glasses enough to comprehend that Thursday's mainstream popularity has dissipated. Like other groups featured on the cover that February 2004 issue -- such as the Darkness and The Distillers - things didn't really get bigger for Thursday. Their follow-up to War All The Time - A City By The Light Divided - didn't live up to commercial expectations. The band was subsequently dropped from Island Records, and eventually migrated to Epitaph Records.

The band released Common Existence, which peaked at number 56 on the Billboard Top 200 - a far cry from War All the Time's trajectory.

That's not to say the band even wanted or craved massive commercial success. And I can't discern whether albums sales had any influence on the band's latest decision. But Thursday probably wasn't pining for what happened in 2009 at the Pageant.

It was clear from the start that the band was miscast. Most of the other bands on the tour - such as Four Year Strong and Pierce the Veil - had a much more abrasive sound. They also appealed to a younger demographic than those who snatched up Full Collapse in 2001.

Such was the case with the other notable act on that tour, Bring Me the Horizon. The English group is, for the most part, an unlistenable and melodically-deficient band that managed to attract a lot of rowdy kids angling to mosh. And boy, did these fans mosh, even managing to kick this writer squarely in the shin.

By the time Thursday came on stage, the Pageant was distressingly empty. Only a few old fogies seemed to want to see "the next big thing." It seemed other bands had passed Thursday by in terms of popular taste.

The scene at The Pageant reoccurred multiple times throughout that tour. Chart Attack noted that at a show in Toronto, "the majority of people at this show either didn't know or didn't care about these post-hardcore heroes. Instead, everyone left after BMTH." Phrequency noticed the same thing.

And music enthusiasts weren't the only people who felt the crowd exodus. Earlier this year, Thursday guitarist Tom Keeley told Niagra Music Scene.com that the Taste of Chaos stretch represented a low point for the band:

It was literally worst than the worst nightmare I've ever had about being in the band. By far. I have a lot of anxiety dreams about being on stage. Gear breaking, at the beginning of a song there's all these people, and part way through the song half the crowd leaves. There were shows on that tour where literally 90% of the crowd would leave. It was terrifying. Such a bum out.

Everyone thought doing Taste of Chaos would be a great idea around the time of Common Existence. Ended up being one of the worst ever presented to our band. At the end of the day, we made it through and took a bunch of months to be like "I'm never doing that again."

Later in that interview, Keeley reflected on how the expectations hoisted upon his band were unrealistic:

The songs we write now are more for us than they have ever been. When we did War All the Time, there was a lot of attention paid to promoting our band. All these people were like "Thursday! It's going to be like Nirvana! It's going to be like U2! It's gonna be huge and everyone is going to LOVE it. Everyone should listen to it!"

That's just not true. Some people are really going to like it, some aren't going to get it, and some are going to hate it. Our touring now and the way we operate is the most reasonable we've ever been. We wanna write songs were happy with. If you wanna see us play these songs, come to a show! It will be a fun time.

That may provide some silver-lining to fans of the band, as well as groups that trudged on after initial commercial success became elusive. And if there's one bright side to Thursday's imminent departure, it's that they're leaving at least on a musical high-note . No Devolución - the band's follow-up to Common Existence that was released in April - is one of the year's better-reviewed albums. It's not going to rival Adele or LMFAO in terms of chart dominance, but it's worth a spin or two. Who knows? Maybe it will inspire somebody to pick up a microphone and practice screaming enough to end up on SPIN Magazine's cover.

Indeed, what is popular at a certain point in time is not going to be in the mainstream forever. But at least in Thursday's case, the band leaves behind a sizable array of memorable tunes.