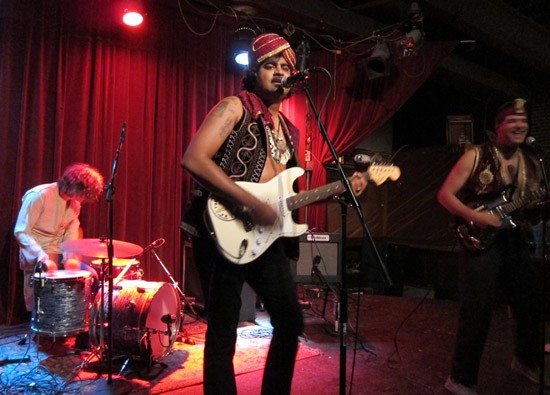 It's said in rock & roll there are no rules, but there are always expectations, and sometimes they can kill the music, as they did with the regicide of Elvis Aaron Presley. The King can get away with murder, but he can't get away from himself or his subjects.

An audience with the King, as in King Khan -- he of the Shrines, the Black Jaspers, the Spaceshits, the Almighty Defenders, the BBQ Show and the Tandoori Knights -- is always more than a gig. It's an event, a bacchanal, a big rock & roll whoop. That said, last night at Off Broadway might have been the exception to prove that rule.

After a notoriously aborted date with Mark Sultan (aka BBQ Show) at the club in November 2009 -- something about a drug bust in Kentucky -- Khan last appeared in St. Louis at 2720 Cherokee in the fall of 2010, a show that still reigns as one of the wildest sets by any of the big-band soul revivalists. There were sex machine dancers, regaling horns, non-stop groove and joy. It was the celebration of life Khan says he wants his shows to be.

Tandoori Knights is a different experience, a different sound. Led in fact by Bloodshot Bill, a fellow Canadian by birth -- and featuring Khan on guitar and the stray vocal, with Nadeem Khan on upright bass and Josh Johnson on the shittiest-sounding drums this side of the Shaggs -- the band blasted through a dozen or so songs in the psychobilly, sub-primitive style that makes collectors of Norton Records 45s cream but which on-stage mostly gnashes and snarls semi-psychotically, and only half catches fire. It's a mean and relentless noise, for sure, and Off Broadway's sound man -- on this night, the RFT's own Tom Carlson -- suffered the angry, set-long demands of Nadeem Khan to turn up his instrument. I felt for Carlson: Tweaking such chaos is like trying to mix a cannibal ritual.

Local openers Magic City sounded Olympian by comparison, with front man Larry Bulawsky getting down on the floor for some snake-oil barking, and drummer Sam Meyer whacking blisters into his palms. I'm most drawn to the Cramps side of the band's vision and less to its doom blues; after my late arrival, the four final songs came off just fine, with that weird mix of joie de vivre and joi de mort that Magic City always gets.

The first Tandoori Knight to take the stage was, appropriately, Bloodshot Bill, dressed in striped pajamas and manning a kick drum, cymbal and pawn shop guitar for a one-man-band rockabilly workout. Who knows if he's ever played St. Louis before (anyone?), and after a five-year travel ban to the U.S., he seemed to relish the time in the spotlight. You could smell the pomade in his pompadour and the barbecue on his breath; you could also nearly feel his larynx bleeding as he snorted, oinked, wheezed, blubbered and cackled (these verbs are precise, people) like Wolfman Jack, Hasil Adkins and Linda Blair rehearsing "Surfin' Bird" together (this analogy is not).

With a virtuoso, primordial vocalist like Mr. Bill it's no wonder he led the full quartet of the Tandoori Knights through the evening, a set that started after 11 p.m. with the gutbucket triad of "Eenie Meenie Minie Moe," "Bucketful" and "Lover's Moon." King Khan, wearing an open vest and a scarlet turban, swayed across the stage, teasing the front of the crowd -- finally dancing, really dancing -- with his guitar, mischievous smile and over-the-top Indian cabbie impersonations. His cohort spun about, whistled a melody through the thrashing twang and grunted a bit too convincingly: "I want to stick my nose in it!"

By the time Nadeem Khan lunged towards the floor with big bass in tow, the set was near, but only near, the expected chaos and jubilance. When Bloodshot Bill invited a quartet of fans to the stage to help close out the night on a twisted cover of "Alley Oop," he quickly wished it had been a trio. One kid flirted with the puke and had to be tossed off.

But one monkey don't stop no show. And one band, even on a slightly off night, can still make you feel young and silly and thankful for rock & roll.

Personal Bias: My skepticism of rockabilly affectations is a matter of record. Performers like King Khan and Bloodshot Bill don't just rise above shtick. They make shtick itself transcendent.

By the way: On the back of Nadeem Khan's bass you'll find these words: "I Fuck Greasers."