Spankalicious Moves to Cincinnati, but His Roots Remain in St. Louis 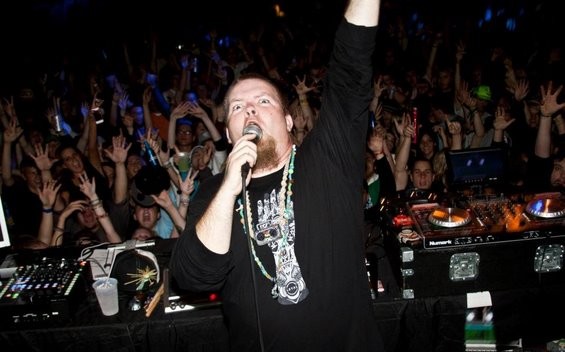 Local bounce beatsmith Spankalicious recently made the move to Cincinnati, and tomorrow night he plays one of his last 2011 dates in St. Louis at 2720 Cherokee (2720 Cherokee Street, 314-664-9900) with Bay Area's Getter.

Kevin Moore has been touring around the Midwest for the last year and a half, getting tapped for big-brand jamtronica and dance festivals like Wakarusa, and scoring opening spots for Borgore, Pretty Lights and the Glitch Mob. Moore says he'll still be playing in St. Louis every month, or at the very least bimonthly, and mostly from his base of operations at 2720.

Moore's manager Eric Noble of Loyal Family said he sees big things on the horizon. "It's a big world, and we plan on giving it a good spankin' before this ride is all said and done," says Noble. The two are in talks with a couple of major agencies about 2012 bookings. We talked to Moore about his plans for the future, which include some big name collaborations as well as three EPs and some surprises in 2012.

Diana Benanti: Tomorrow night is one of your last shows in St. Louis this year. When did you decide to make the move to Cincinnati?

Kevin Moore: We made the move in the beginning of September, but we've only been here about twelve to fourteen days since then. We've been on the road. That's where my daughter was, so that was the goal, to get to the city where she was, and I was finally able to do that. It was nothing creative or careerwise, just to get over here with her, man.

How old is she?

She's six, she turned six in September, she's in first grade. It's awesome, her mom and I get along real well, so when I'm in town I get to pick her up from school and we get up at 6:30 and get her ready for school like all the regular parents and do that whole routine.

What does she say when you have to go out on tour?

She hasn't really grasped the concept of it. Not to throw Justin Bieber's name into the mix, but she's a huge fan of Justin Bieber, and we have the movie Never Say Never, so she has some frame of reference to what I do. Now that we're here and we see her a lot more, and earning things about calendars and all that, she's definitely getting a grasp of how long daddy is going to be gone this next time. I only have a couple spot dates left this year, so I'm coming up on the most time I will have been able to spend with her in the past three years.

That's great. How did you get hooked up with Borgore?

That was all with my manager. I tell you what man, my manager at Loyal Family, we built a lot in St. Louis, and to come over here, I did some research into getting a residency set up in Cincinnati, and it was a scenario where I'd played for Borgore before when he was here in June; he came through St. Louis, and my agent in St. Louis had him booked at the Blue Note in Columbia. The dates were open, and it worked perfectly to coincide with my residency in Dayton. With anybody that I play with anymore, it's just a blessing and fate has taken over on a lot of things. It's gonna be awesome to go into Dayton and bust into the market with such an awesome headliner. What are you going to miss about playing in St. Louis?

Not gonna miss anything about playing in St. Louis, my goal is to be in St. Louis every month. It's weird with the transition, there have been a lot of shows in the Midwest. St. Louis is the reason I'm doing what I'm doing; without St. Louis there would be no Spankalicious. There's a lot of kids who have taken DJing up, and they continue to hold down the scene there.

Of the kids who are, as you said, holding it down, who are you blown away by in St. Louis?

Really it's a guy named Bommer. Zack Bommer. He's one of the kids who have taken it a step past Djing, he's going into the production realm, he and a guy named Meechie. Bommer, he's the youngest kid in St. Louis doing it right now, he gets on some good shows, he's consistently playing at 2720. If there's anybody in St. Louis that has my blessing, it's that kid for sure.

Man, I'm a fat kid so I'm picky. Cheese and pepperoni, and sometimes bacon if we got the extra two dollars for the topping.

Looks like you've done quite a few dates at festivals and one-offs this year. What's been your favorite show of 2011?

The first one being the Wakarusa set that I played this year in Arkansas. It was a Friday afternoon, 4:20 set, and it was hot as hell. It surprised me, there was probably over 400 to 500 people who came down the hill for my set that day and we all sweated our asses off for an hour. It was epic. A more recent one was at the Copper Dragon in Carbondale, over 600 kids that showed up. Those are the kids that have had my back, kids in the Midwest. Going into 2012 man, we're finally going to get out to the West Coast, and really hit the East Coast. We've been from Denver to Grand Rapids, to New Orleans to Atlanta, and all the way to Fargo, North Dakota this year. So really we just need to hit the edges and we'll have everything covered.

I was just going to ask how you think the dubstep and dance scene in the Midwest compares versus LA and the East Coast?

A lot of people are really starting to pay attention to what's going on in the Midwest. There's a lot of heavy producers coming out of the Midwest and I think we've finally hit our little piece of appreciation from the rest of country and the world. St. Louis is strong man, I'd say in 2010, St. Louis was the dubstep capital of the Midwest for sure. We brought through every main headliner, producer, that people in the electonic slash dubstep, future bass scene would want to see. We represent hard in the Midwest, I think we're just as big a contender as anyone in LA. Or anybody in New York would be, man.