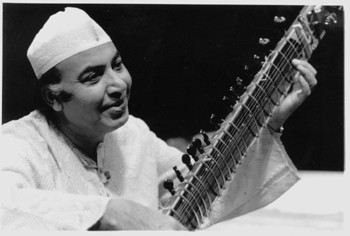 For most adherents of old time rock n' roll, the sitar is perhaps best known for its dynamic contribution to classic Rolling Stones and Beatles tunes.

But long before Brian Jones provided an ominous backing to "Pant it Black" or George Harrison took the world "Across the Universe," the sitar was a ubiquitous presence throughout the Indian subcontinent. And one of the instrument's masters has solidified a recent presence in St. Louis.

Ustad Imrat Khan - the Calcutta-born master of the sitar and the surbahar - has spent time in St. Louis since the 1980s. And 10 years ago today, he performed at the Ethical Society of St. Louis - which was perhaps why the RFT decided to write about him for its November 14, 2001 issue.

As he noted in Roy Kasten's article a little over ten years ago, Khan comes from a fairly developed musical lineage. He is a part of the Etawa Gharana musical dynasty that his website states can be traced back over 400 years to the court of the Mogul Emperor Akbar.

In his interview with Kasten, Khan noted that a bit of good fortune helped influence his musical direction:

"My family is considered one of the greatest sitar-playing families in India," Khan told Kasten in 2001. "I don't really like saying all these things, but if you read some Indian history books, my forefathers are mentioned. My maternal side, for hundreds of years, are also great singers.

So I'm very fortunate my father married my mother."

Khan's father - influential sitar and surbahar player Enayat Khan - died when Imrat Khan was three years old. He later received influence and teaching from his uncle Wahid Khan. His brother - Vilayat Khan - was also a famous sitar player in his own right.

Throughout his career, Khan played extensively throughout the globe. His website notes he was the first Indian musician to play to play in a BBC Proms season.

Additionally, Khan's well-known teaching career includeda role as a visiting professor at Washington University. [Peggy Bischof, a receptionist at the Washington University School of Music, said on Wednesday Khan is no longer an employee at the institution.] And one of the more interesting tidbits of Kasten's article regarded Khan's education of Jones, the Rolling Stone musician.

Jones - who, of course, played the sitar in the aforementioned "Paint it Black" - had come to Calcutta to be Khan's student back in the 1960s. But Khan told Kasten that Jones was not exactly in the right mind to learn:

"That was in the '60s, and the Beatles were interested in sitar. Beatles started to come to learn from me, and also the Rolling Stones. Their guitar player Brian Jones was my student. He had already come to Calcutta to be my student. But when I came to London, Jones was too much into the drugs. I wasn't happy with the way their direction was going. That was the time of LSD, drugs, the pop mania. I didn't want to get mixed up with that. I used to say, 'I'm grateful that pop stars are getting interested in Indian classical music, but remember that it is not pop music.'

Pop music is always popping in and popping out. I didn't want to be a fashion. I kind of kept a little bit of distance."

After many decades of being immersed in music, Khan is still showcasing his mastery. This year, he performed at St. Louis Indian Musical Festival at the Ethical Society. He also performed in April at Skidmore College in Saratoga Springs, New York.

Want to get a sense of what Khan sounds like? Here's a video of Khan performing in Japan: