B.o.B. Prefers Spaceships to Blunts and Talks Tyler, the Creator. But... 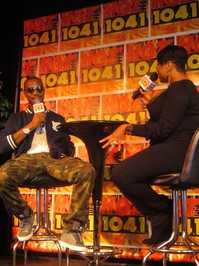 As promised: We waited around the Loft last night for Bobby Ray, better known to the Top 40 audience as rapper and earworm manufacturer B.o.B. He's known for the atrociously catchy "Airplanes," ("Can we pretend that airplanes in the night sky..." MURDER) the Bruno Mars vehicle "Nothin' on You" and most recently for the vaguely spacey party anthem "Strange Clouds." He's also on Tyler the Creator's shit list, which is sort of an achievement in itself. After a quick interview with Hot 104.1 femcee Staci Static, wherein Bobby Ray revealed his favorite color ("Chocolate"), an affinity for another famous Bob (Marley), the little-known fact that he's the son of a preacher man, and why he really wrote his Odd Future diss "No Future" ("I had to let him know who I was on the mic").

We sat down with the 22-year-old hitmaker last night for three minutes and thirty-six seconds to talk about that $1,060 bar tab he allegedly walked out on, what he has in common with Nelly and, of course, strange clouds.

Diana Benanit: What did you think of the City Museum?

B.o.B.: It was amazing. I went down the slide, I thought I was gonna die before I got on it, but I realized it really wasn't that bad.

Are you trying to get Nelly's career back on track, letting him drop a verse?

Oh, we just had fun in the studio, I ran into him on the video shoot for the "Racks" remix, and me and him are both Scorpios, so we kind get along, so we just wanted to just record something, nothing too crazy.

You got that water-sign energy going on.

[Laughs] You know your zodiac!

Yes I do. So who would win in a fight, you or Tyler, the Creator?

Have you seen his show?

Yeah, yeah I have. It's a good show. Not to take away from him as an artist or anything, but.

What's the song you're most proud of on the new album?

What's your preferred method of application for your strange clouds? Blunts? Js?

Ha, spaceships actually. They're much more efficient, and they save the environment. Real energy efficient.

What kind of music are you into right now?

It was a really good opportunity, to get his energy on "Strange Clouds" it was necessary. The type of beat it was, the subject, and I feel like me and him both have a connection to the cosmos and the galaxy, so I felt like he would really understand what I meant when I said "strange clouds."

Do you have a dream collaboration that you've yet to achieve? Who do you want to work with?

You know, I don't really have any super dream collaborations, I like to go off of a whim. I like to just meet people and if that temperature is there, then we'll do it, if not, if not. I'll work with everybody.

Are you excited about this tour coming up?

Yes, I'm very excited. This album, man, I just want to take it around the world. I really want everyone to have a great experience off of this music when they listen to it. So I'm excited for that.

Have you walked out on any bar tabs lately?

To my knowledge I've never walked out on a bar tab. [Laughs] I guess there's other people who may think so, but it is what it is.

It is what it is. Thanks so much.

Hey, you enjoy those strange clouds! 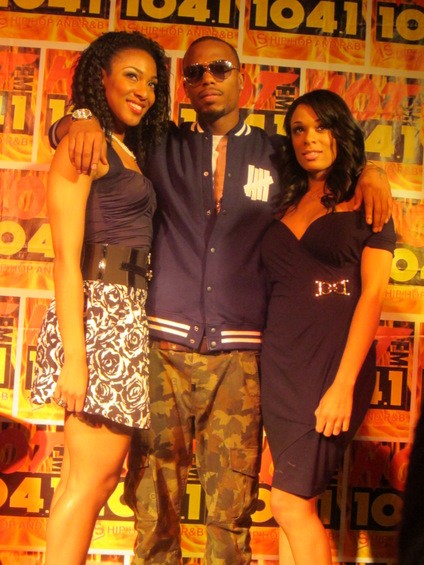