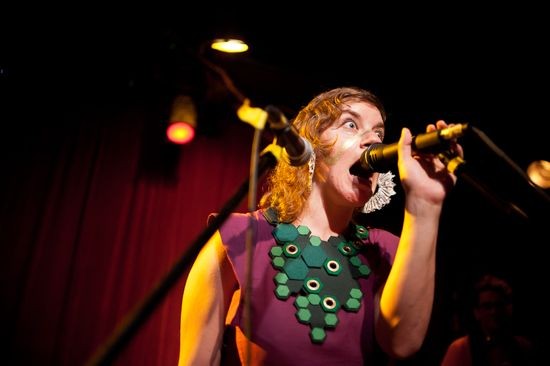 Attending a show is participating in it. There is no such thing as a bystander at any occasion of live music; every single person, whether on stage or not, affects the proceedings in a very real way.

But rarely does a show actually feel that way as it's happening. People chatter and lose themselves in cell phones and preoccupations, and there develops this illusion that there is no practical difference between the stage and a big living television screen.

The situation is improved at small shows, where the performers know the audience members and everyone is constantly aware that the community comprises every single person in the building. When the band starts to reach a wider and wider range of ears and the crowd swells, that bond gets harder and harder to maintain. It strains at the disparate group, when the faces are unfamiliar and the performers have existed to this point mostly on everyone's computers and .mp3 players. So when several hundred strangers from St. Louis and a band from Connecticut are able to find the alchemy that results in half the crowd milling congenially around on the patio afterward, as it happened last night at Off Broadway, it is a rare and powerful experience.

Click here for a full slideshow of tUnE-yArDs at Off Broadway.

Opener Pat Jordache gave a taste of the rhythm to come, with two drummers and the melody mostly carried by Jordache's bass. What he shares with Merrill Garbus is a feral aesthetic and an affinity for the floor tom; among the many things he does not share with her is inflection - Jordache sings murmured rebukes. The Ian Curtis comparisons are inevitable.

The four-piece arrangements greatly improve what were already compelling lo-fi recordings. Note in particular "Salt On The Fields," which, bolstered by a chorus of shouts on the hook and a liberal increase in primal wailing, is your official Jam.

Merrill Garbus takes the stage in costume: A pretty maroon dress that looks homemade, big earrings that look they could be shell or something and of course face paint. A gold streak that crosses her nose and curls on her left cheek. When I see her outside after the show she has changed into a T-shirt and jeans. It's not that she plays a character on stage, exactly, but she takes on this expansive persona that allows her as wide a spectrum of expression as any musician I have ever seen. She is a modern-day activist and an ancient storyteller and a beaming ruler and a menagerie of wild animals. So huge is her vibe that it consumes the entire room - strange noises and natural movements and unencumbered euphoria emanate from the crowd.

tUnE-yArDs has always been an arresting thing to witness - Garbus, early on, stated a goal of making everyone in the venue either pay attention or leave. As an opener in her first four shows in St. Louis (three of them at Off Broadway) she was required to introduce herself to large portions of the audience. I wasn't there for any of those first gigs here, but I watched her persuade an enormous venue full of Dirty Projecters fans in 2009, and our own Diana Benanti saw something similar last year at the Lemp.

But things are different now. She's carved out a fan base and released an album, w h o k i l l, that demands attention almost as well as her live show. Every once in a while, everything converges for an artist that completely deserves it, and tUnE-yArDs first headlining show in St. Louis sold out at the door.

You can feel the difference. She can now electrify a room simply by showing up. Her Limbs Of Vishnu loop pedal work remains perilous enough to be exciting but is now considerably more assured. She sprouts these songs on the fly in impossible detail, in some cases looping one note after another. And against all odds the show does not turn into a clinic on technical ability. This stuff happens conversationally and once the base is built she turns her full attention to heart-pounding mantra and melody. Oh, and now there are saxophones. Two of them, to be exact, and this was the missing ingredient. They follow Garbus in and out of the songs, squawking and buzzing, instilling richness.

The end of "Hatari" remains a special kind of thrill. The band saved it for the encore, and after all that, after the running-across-the-savanna bliss of "FIYA" and the thunderous visit to Oakland on "Gangsta" and the rest, we have Garbus standing tall, delivering her manifesto:

Best show of the year.

Notes, setlist and more photos on the next page.

Overheard: Animals whose noises were emitted by people in the crowd: Dog, several kinds of birds, some sort of big cat, various undistinguished. Garbus only actively solicited one of them.

By The Way: Garbus went out of her way to thank the audience, KDHX, the venue and its owner, Steve Pohlman... "Point is," she says, "You are a city of love. More than Paris."