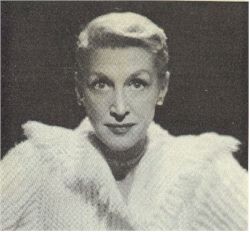 Modern music constricted what it means to be multi-faceted. Today, Justin Bieber would fit that description because he sings, dances, appears in a substandard 3-D movies and wears questionable hats.

That aforementioned generality isn't exactly fair, as plenty of artists in this modern age genuinely excelled in a variety of mediums. But back before Bieber Fever or Kanyepalooza or even Michael McDonald Mania, Kay Thompson took the "multi-faceted" to another level.

Thompson - a St. Louis native who was born on this day in 1909 -feverishly worked across a wide spectrum of popular media throughout her long career. Thompson assisted in a nearly unending list of movies and television shows, starred on countless programs, lent her voice to records and wrote an enduring children's book series.

Born Catherine Louise Fink, Thompson got her start working behind the scenes on a number of radio shows across the country. Some her radio credits included the St. Louis Symphony Concert, The Anheuser-Busch Antics and The Phillips 66 Flyers. Throughout the 1930s, she appeared on programs such as The Bing Crosby-Woodbury Show and Tune-Up Time.

Thompson turned her attention in the 1940s to Hollywood as a vocal guru for MGM Studios. There, she worked on musicals such The Ziegfeld Follies, Meet Me in St. Louis and The Harvey Girls. Thompson's work behind the scenes was expansive, as she spent time as a creative consultant, choral director, song composer, vocal coach, choreographer and wardrobe designer. She was also featured in Funny Face, a popular 1957 film that starred Audrey Hepburn and Fred Astaire.

While Thompson's media footprint was everywhere for decades, she arguably made her biggest impact as a children's author. She collaborated with artist Hillary Knight to create Eloise, a 6-year-old girl who lived at the top of the Plaza Hotel in New York City.

Interestingly, Eloise the character was possibly based off Thompson's goddaughter, the also very multi-faceted Liza Minnelli. Thompson and Minnelli's mother - Judy Garland - were close on both a professional and personal level.Thompson even spent her twilight years living in Minnelli's penthouse.

Thompson's contribution to St. Louis didn't go unnoticed. She was inducted on the St. Louis Walk of Fame in 2003. Even after Thompson's 1998 death, Simon & Schuster continued to release Eloise books based off the character.

For more information on Thompson, check out Sam Irvin's website. In the meantime, here's a little birthday cheer on what would have been Thompson's 102nd birthday: