'I Am Fighting To Obtain Your Hearts And Ears For The Duration Of A Lifetime.' Download The New Tef Poe Mixtape Now

Tef Poe has a new mixtape, Power Over Everything. This is a stopgap, a lead-up. In Poe's own words, "I am asking you to view this as an off-season exhibition game." But this is not a man who takes breaks. This is not a chance to ease up but a chance to push harder, a chance to try new things and find the edge, to conduct some experiments. "On some of these tracks, I am simply attempting to rap like I am dying in the booth," he says. "I am fighting to obtain your hearts and ears for the duration of a lifetime."

You have to admit, some of these NBA lockout exhibition games have been pretty damn exciting. Download P.O.E. via hulkshare or mediafire right now.

For Poe, this represents a chance to free his writing by returning to the form his rapping took in the beginning. He explains:

In the early stages of my journey to become a a rap star (laughs), I started in the pits of the freestyle ciphers. I had to go head to head against cats that could really rap. I would often find myself rapping over popular tracks I heard on the radio. I'd listen to albums from rappers I wanted to be like and dreamed about how I would approach their tracks if I was one day invited to do so. I started doing mixtapes of this nature and it helped me create a decent buzz for myself. Trackstar would often lend his talents to my cause and helped leak more than a few of these freestyles. We worked together on one of my previous LPs Money Never Sleeps. This current mixtape has offered us the chance to return to our roots.

Yesterday on his blog, Poe posted Charlie Chaplin's iconic speech about humanity in The Last Dictator. He suggests you listen to it as you download P.O.E.; do that below.

As for the rest: his full-length follow up to War Machine is coming. So is a joint release with Rockwell Knuckles called The Davis Ruffin Theory. We'll let you know when they're coming. 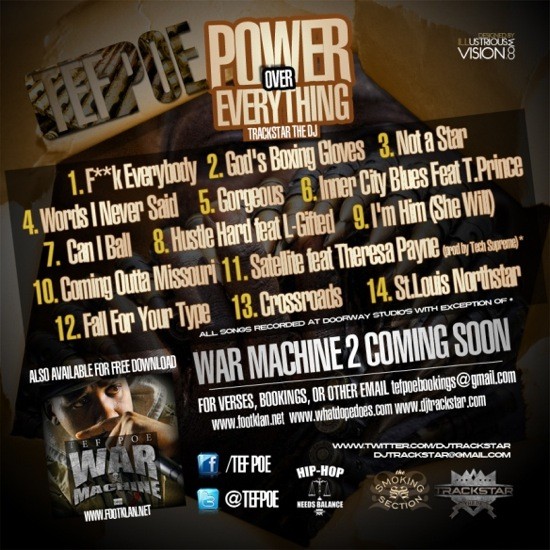