Zooey Deschanel Is As American As Baseball, Christmas And World Domination 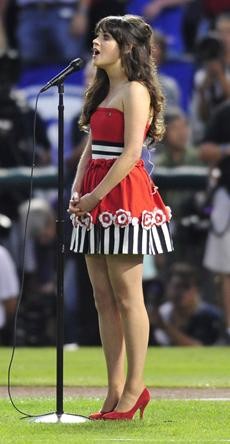 One question has been burning in our minds since Zooey Deschanel's hesitant but pretty national anthem performance at Sunday night's World Series game: Why is she still here and what exactly does she want with us?

The actress turned singer-songwriter/well-compensated-shill kicked off Game four of the World Series with an acapella rendition of the national anthem, looking stupid-cute in a Moschino confection. But there was something familiar about her trembling contralto. Her musician husband did the same thing around this time last year in a similarly nervous fashion, but at a much lower profile game. The difference: He has a voice meant for singing. We've been frauded into thinking she does too, despite all evidence to the contrary. Then she had the gall to leave the stadium before the Rangers were done stomping the Cardinals, and took to Twitter for some thoroughly modern face saving: "Would have loved to have watched the whole game but I had to catch a plane so I can go to work tomorrow. That's all guys. I'm not a jerk."

And the unstoppable Zooey freight train continued into yesterday: the new She and Him album dropped. Well, it didn't drop so much as softly plopped like a rumball in a pile of fake snow, because it's a Christmas cover album. That soft plopping sound is soon to be familiar, you'll be hearing it again when you throw the She and Him mittens -- one-of-a-kind, free with purchase -- at the wall. That's until you hear her timorous, oddly depressing covers of yuletide favorites coupled with M. Ward's spare arrangements, where that plopping becomes the sound of one's hand making repeated contact with one's forehead in an attitude of confused, nameless disgust. Well, not entirely nameless, because dude, the ukelele has no place in "Silver Bells."

Not to mention the fact her precious visage has been all over everywhere since summer, gooey eyes gazing out of billboards and bus shelters, silently imploring you to come watch her be downright "adorkable" on your local Fox station, every Tuesday, from 8pm to 8:27pm. She wrote and sings the theme song for the show, The New Girl, (which is on basic cable, if you know what that is) and in case that weren't enough for your double dose of Deschanel meta-appeal: in one half hour show you'll likely see not only her Cotton campaign, but her grinning wide for Rimmel. The 31-year-old is scooping up every opportunity like Bunny Foo Foo and bopping us on the head with her sky eyes and manic pixie wiles. She's infiltrated every aspect of the game, and we wouldn't be surprised if there's a Jessica Simpson-esque breach into merchandizing to come. In late 2010, Deschanel filed a $2 million dollar lawsuit against accessories retailer Steve Madden, seeking payment for thirteen days of photoshoots and promotional spots for a Madden line called Zooey that never came to pass. Steve Madden opted to pay her off rather than actually produce her shoe line, and it's anyone's guess why she got the boot. Though it's hard to believe overexposure didn't have something to do with it, because on that score she's tied with the dukes and earls of the Kardashian dynasty.

Perhaps this is what she wants with us; maybe her role in the Will Ferrell vehicle Elf was epic foreshadowing, a clue to her ultimate goal: to be a latter day Amy Grant -- harmless, heartwarming, and invited to every Christmas.