Chromeo | Mayer Hawthorne and the County | Breakbot The Pageant October 25, 2011

Some shows are for toe-tappin' while seated with a beverage in hand. Others are for standing and swaying or nodding your head. And still others that can only really be appreciated from the middle of a sweaty mass of wildly gyrating strangers.

In theory, it shouldn't be too difficult to turn a room full of people sitting into a room full of people dancing, especially when that room is a concert venue, and the people are there to see live music. Of course, the recipe for ass shakin' often comes up short a few tablespoons of funk, a splash of soul, a dash of techno. Chromeo has mastered its method, creating a spectacle of booty-shakin', pussy-poppin', baby-makin' proportions. And thank the '80s synth gods that they finally brought the flashy tableau to the Lou (clad in Cardinal-red, no less).

While the upbeat affair was well-orchestrated from start-to-finish, the credit isn't Chromeo's alone. The night opened with DJ/producer Breakbot, who clearly knows how to work a room. When mixing for a near-empty Pageant, his movements were subtle, and the cymbals-fighting-with-synthesizer beats were a great soundtrack for both the kids dancing in the pit and the seated drinkers. As more folks filed in, his beats and presence grew bigger, louder, more intense, seamlessly leading into the sweet soul sounds of Mayer Hawthorne and the County.

Check out a full slideshow of Chromeo at the Pageant. 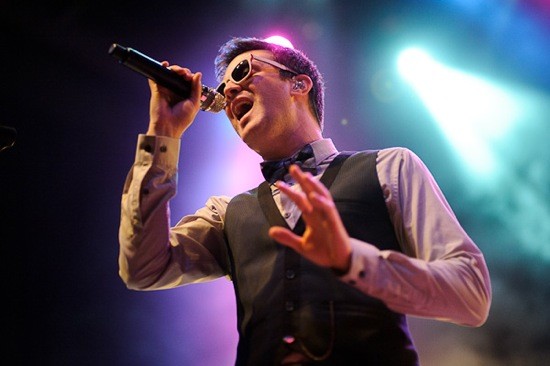 The Detroit native is a bit of an enigma. He's 32, but he looks 20. He couldn't be more contemporary (his sophomore record, How Do You Do dropped two weeks ago today), but his R&B crooning sounds straight out of the '60s. Hawthorne set the tone for the rest of the evening with the energetic and earnest cover of Hall & Oates' "You Make My Dreams Come True," which got the remaining asses out the seats.

And then came Chromeo (ohhh ohhh). From the moment Chromeo took the stage (for its first ever stop in St. Louis) until its exit an hour and a half later, the grooves were relentless, and the mood never dipped below "fucking ecstatic" as the duo plowed through old favorites like "Needy Girl" and "You're So Gangsta" to "Tenderoni" and "Bonafied Lovin'" all the way through almost all of Business Casual; a reminder that there's not a bad (or even mediocre) song in the Chromeo catalogue.

Dave 1 and P-Thugg, posing behind keyboards supported by their signature sexy, glowing legs, might appear to depend on kitsch, but as they manipulated synthesizers, guitars, keys, a talkbox and so much cowbell, flawlessly recreating their infectious studio jams, they displayed their very authentic talent as musicians, song-writers, nostalgia-evokers and party-starters. 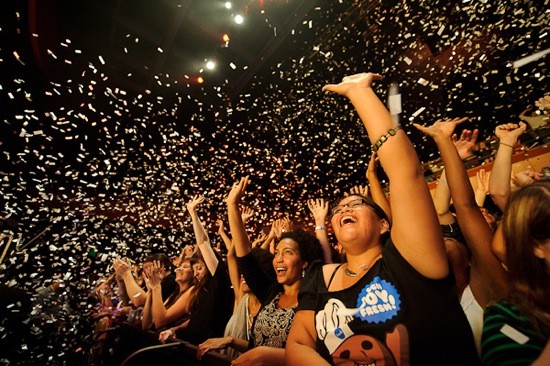 Personal Bias: I'm a huge fan of a good, sweaty dance party. And that, my friends, was a fantastic dance party.

Overheard: In the ladies' room, a tiny thing towering on four-inch heels shouted "I'm 100% Irish! All I can drink is Jamieson, and I drank a lot, okay?!" I told her I was impressed that she could walk in those heels, especially after all that Jamieson. She then did a little dance (show off!) and proceeded to lick her thumb and use it in attempt to wipe the freckles off my chin in a (drunk) motherly fashion. It was beautiful.

And, via Facebook: "This Chromeo show is going to create soooooo many oops babies!"

By the Way: Prior to the show, P-Thugg was diggin' in the crates at Vintage Vinyl for hours. In fact, I left for the show before he did.