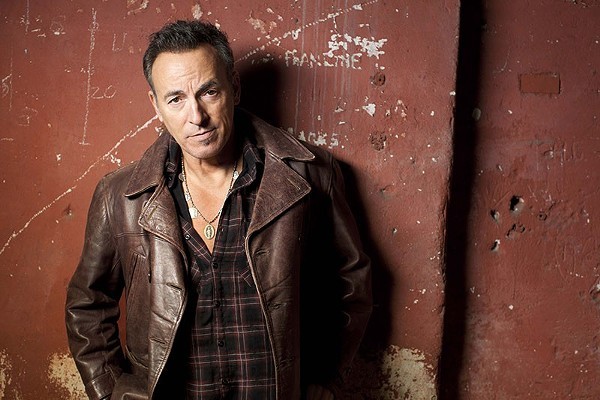 Today is Bosses Day. If you knew that before you read it here, chances are your boss informed you of this fact when you arrived at work this morning. Unless your first name is Max and you have Conan O'Brien on speed dial, your boss is probably not the Boss. In all actuality, the untouchable Bruce Springsteen might make a terrible employer. His office might be one filled with self-doubt and sexual harassment, where all employees are constantly told they deserve better or coaxed into spending the night in Bruce's arms. But, as with all places, the corner office could use a little more influence from the Boss. Below, the six Springsteen lyrics we'd most want our bosses to say to us.

It's rare for a combination of words to work as a rock song and a caption on a motivational poster. The "neighbor/friend" sentiment is more Mr. Rogers than Mr. Springsteen, yes. It's still a comforting thought for a workplace. Imagine slinking to your desk on Monday morning, dreading another monotonous week. Your boss comes up behind you, one hand on your shoulder, the other hooking the handle of a coffee mug, crooning in a Jersey growl so passionate it must be convincing — "Everybody has a reason to begin again." What a morale booster!

5. "Across The Border" from The Ghost of Tom Joad

The ideal boss should make you feel special, wanted, valued. He/she is your indirect link to the American dream. Bruce wants to cut out the middleman and build you that house on the hill with the white picket fence and 2.3 children all by himself. Maybe a bit clingy for a professional relationship — think of the potential "I made you a house with my bare hands, the least you could do is get me that expense report in time" guilt trips — but such is life when you're working for the Boss.

It's good to know your boss will be there for you when needed in your personal life. It's even better when said boss owns a Batmobile.

3. "A Night With The Jersey Devil" - download only single

"Drag me to the river, tie me in rocks/ Throw me in where it's deep and wide"

Everybody, regardless of race, creed, or temperament, will at one point in life want to kill the person who writes his or her paychecks. Bruce's lines on "A Night With The Jersey Devil" practically give you permission to do the deed. Would that hold up in court? Probably not. Later, he sings "Make me a guitar outta skin and human skull." Who knew Springsteen was so metal?

2. "All The Way Home" from Devil and Dust

There are two advantages to hearing these words in the workplace. First, it proves that your boss is empathetic and forgiving. Bruce knows what it's like to have failed, baby, so don't be so hard on yourself for accidentally omitting the fries on that last drive thru order. Secondly, as he admits to hitting rock bottom, being a passed out, boozed up loser in the past. he gives his subordinates some rich dirt to use as leverage. He is not exactly offering a get out of jail free card for failures, but he lets you know his expectations are reasonable.

1. "Rosalita (Come Out Tonight)" from The Wild, The Innocent, and the E Street Shuffle

"I ain't here for business/ I'm only here for fun"

In song context, the line reads as "I don't want a relationship, I just want to hook up." Erase the metaphor and I can't help but think of the less tragic moments of The Office, those times where Steve Carrell's Michael Scott character melts your heart with his charming naivete. If somebody said this was a lyric in the verse of Todd Rundgren's "Bang On The Drum All Day", I would probably believe them. When Bruce sings it, we're reminded of why people want to be professional musicians or actors or entertainers in general. Baby boomers love to say that when you love what you do, you never work a day in your life. It's nice to get some money in your billfold, sure, but that isn't the point. Bruce Springsteen, The Boss, the voice of the working man, isn't here for business. The zeroes on his royalty check are a perk, but he's only here for fun.