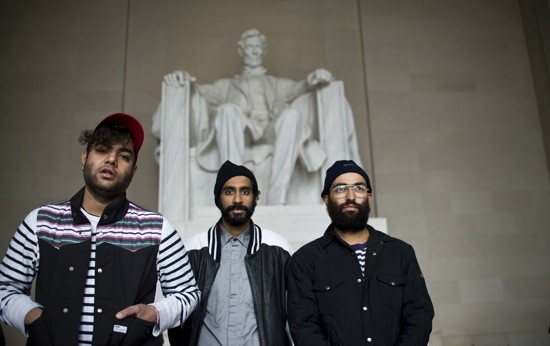 The Cardinals are going to the World Series! There's dancing in the streets of St. Louis! Or so I would imagine. I don't know for sure, because I'm in the Firebird, where Das Racist is two songs into its set. I've been at shows for a whole bunch of these playoff games and every single musician has made some acknowledgement of the proceedings from the stage. These are typically congratulatory or conciliatory, depending on the score, but always earnest. The closest anyone I've seen so far head towards sarcasm is Jeff Tweedy with his, "I love sports ball." Not for nothing was he also the only one I've seen whose ticket sales didn't take a substantial hit as a pretty obvious effect of the game.

It looks, for a while, like Das Racist will not be making reference to what's happening in Milwaukee, but Himanshu Suri (Heems) finally does say something about it. Immediately thereafter, into the cheers erupting from the sparser-than-it-should-be crowd, he and Ashok Kondabolu (Dapwell) start chanting, "Sports are bad," and, "Booo, sports." I'd say it's not an accident that they started in on that just after "Amazing," which contains the lyric, "Used to play basketball/then we started drinking." But I could be wrong.

We're two mix tapes and now a full-length album into a career that has seen Das Racist leave a trail of laughter, head scratching and, more and more, pumping fists and shaking asses. And the answer to that initial question - is this for real? - is becoming clear: stop asking.

Whatever way you head in the search for some sort of coherent through line of reasoning, you'll find these three far ahead of you, gleefully folding and splitting and contradicting any possible conclusions you might be drawing. Heems and Victor Vazquez (Kool A.D.) have been ramping up the "I'm good at rapping" lines in recent months (See: Heems' final line on new single "Michael Jackson," "Yeah, I'm fuckin' great at rapping."). It's a joke about braggadocio, or maybe a joke about the Internet's general and complete about-face re: Das Racist's ability to rap. And then, Heems instructs his "DJ," - Lakutis, whose beat-jockeying duties really just amount to pressing play on a laptop -- "Play another one of our shitty-ass songs."

This is a group that hit its tipping point with a song called "Combination Taco Bell and Pizza Hut," a fact that seems to trouble the three just a little in that they never, ever play it live. Whether it's because they think of it as a "shitty-ass song" or just don't like the way it has been appropriated is anyone's guess. But one of the new jokes they had last night was introducing pretty much every song as "Taco Bell and Pizza Hut."

So, free of the impulse to try and make sense of all this, we are left with just enjoying the ride. And there is so much to enjoy. The lyrics, as even fans with a passing interest will know, are densely knotted with far-flung references and unexpected rhetorical twists. And the ambling insanity of this live show never gets old. Kool A.D. gathers the crowd so he can take a series of diving leaps into it. Heems promises to play us a jazz song. All three keep referring to this as New York, including, at one point, admonishing the crowd by saying, "We didn't come all the way from St. Louis to New York for this." Heems, whose own band mates interrupt him far more than anyone on the floor, gets mock serious and tells us all to, "please shut the fuck up" so they can proceed with their rock and roll show. They invite openers Despot and Danny Brown on stage for the encore, and it is definitely worth noting that Heems pays tribute to both Lakutis and Despot in the "Michael Jackson" verse that appears on record, calling them "pooper scooper" and "Oompa Loompa" respectively. Stop asking.

Personal Bias: Das Racist went from fun to talk about to fun to listen to in a hurry.

By the way: Dapwell passed the time at the merch table before the set by reading the New Yorker, naturally.