Central Middle School Gets $30,000 To Restart Its Music Program 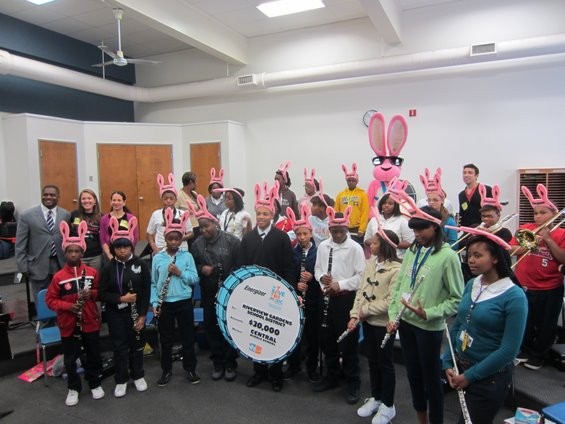 This morning, VH1's Save the Music program teamed up with Energizer and local strummer Javier Mendoza to gift a local middle school with $30,000 in musical instruments. Central Middle School, in the Bellefontaine Neighbors section of St. Louis, received 36 band instruments and the resources to reinstate its defunct band program.

While the giant pink rabbit beat out a tuneless and frankly annoying non-rhythm on his big fake tummy drum, Mendoza treated the kids to a few tunes before they got the chance to make some noise of their own.

"I think it's a fabulous organization. I think it's great that they see it like I see it, and like many people see it, that music is not just important for the purpose of playing it, but to expand your mind," says Mendoza.

Central Middle is one of eight schools across the country who have won grants from Save the Music and Energizer -- the St. Louis based company donated a total of $250,000 so similar gifts could be doled out to deserving districts in Houston, New York, New Orleans and Nashville, among others.

Craig Nowden, the school's music teacher, said Central Middle hasn't had a band program in a few years, and they're delighted to have it back. A former student of CMS, Nowden left the Riverview School District in 2006, and is in his first year teaching at his alma mater. Mr. Nowden said his class was excited very excited about their shiny new instruments.

"They were really excited to get the instruments," he says. "The staff was excited, everyone. Everyone loves music class now." He said it'll probably take the rest of the semester for the class to get its first song performance-ready. "They just played their first note ever on Thursday, tomorrow is the first time they'll be able to take the instruments home," he says, adding that there will be another lesson in instrument care before the kids are able to take their trombones and clarinets home. This is the second time he's brought musicians in to perform for the class. He had Lincoln University's band play for the school earlier this year and said, "Everyone in the whole school wanted to be in band after that."

"Unfortunately I was never in band. I don't know if there was a music program back when I was in school," says Mendoza, who picked up the acoustic guitar at age ten. "I grew up around instruments though, my family all played instruments, so there was always a guitar in the house."

"I think I would have been so much better as a musician," says Mendoza. "Thank god I had some raw talent in some form that I was able to be a singer-songwriter that way. I would have loved to have learned the piano."

Once the official duties were over, Mendoza noticed one of the students eyeing his guitar. "You wanna play?" As you can see in the video below, their mini-lesson draws a crowd, and before long, 6th grader Kelton Rucker belts out a song a capella, showing Mendoza how it's done.