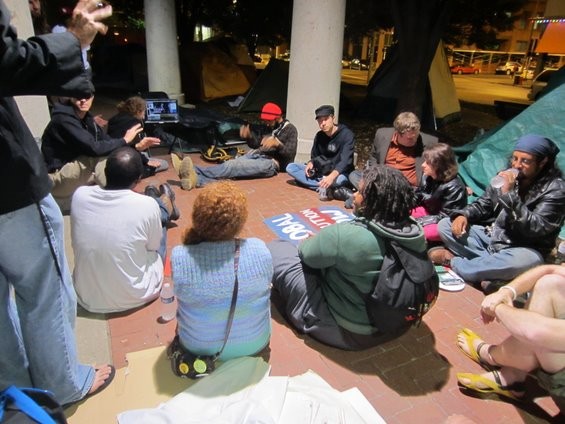 It's Wednesday night, and the dulcet tones of Adele's lovelorn balladry are coming through a boombox. There's a documentary playing on a makeshift screen on the eastern side of Kiener Plaza. Everywhere you go, people are talking, introducing themselves, explaining, "why we're here" to newbies or waving spirit fingers in solidarity of each other's words. The general consensus is that the Occupy insert-metropolis-here movement ain't goin' nowhere. No matter the weather, these folks are here to stay. As the infrastructure of the occupation develops, music is becoming a formal part of the movement. And no, we're not talking about bongo drums. Last Friday, local legend Bob Reuter and Alley Ghost played to a crowd of 200 people gathered on the Plaza, along with Occupy activists and hip-hop group Red Zero. There are more shows planned for this weekend, and an entertainment committee has been formed partly to keep them coming.

"It was a really good show. There were some jam bands, we had a couple hip-hop groups. Everyone just got re-energized and motivated and pumped up. That was when we decided this was something we had to keep doing," says Trey Lott. "It really is just talking all the time, sometimes people just need a little break, a little entertainment, a little r and r."

Lott and Ciera Goodwin have been active on various subcommittees of the movement, though they are quick to deny themselves credit. As another active member put it earlier in the Welcome session, this isn't a leaderless movement, it's a "leaderful" movement.

"I think it's important to keep entertainment going every day because there are so many dedicated volunteers here who just need a break, and there are people who are still trying to figure out what we're doing here," says Goodwin.

The organizers of St. Louis' occupation and it's entertainment subcommittee are planning concerts indefinitely. Tomorrow's lineup is confirmed, and Saturday's is "almost concrete." 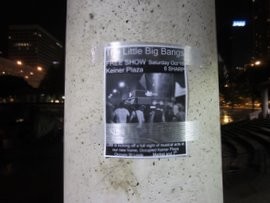 "We try to get as many bands as we can to commit. We're here indefinitely, as far as we know, so we're trying to keep the weekends booked up," says Lott. "I'd like to get some comedians out here, and as you can see we've got people showing movies."

Union Electric -- among South City's most politically outspoken groups -- has been involved since the beginning. Guitarist Glenn Burleigh says the band has brought food and monetary donations to Kiener Plaza, and Burleigh himself has been there virtually every night since the occupation began. He said the weekends have seen much larger crowds. By Burleigh's estimation, there's a "rotating cast" of about 75 who come and go during the week, and a devoted core of 25 to 30 people who spend every night out on the Plaza.

"From what I've seen, even if going by my Facebook news feed, almost all the musicians around town are in support of it. It's a youth movement, right, and most musicians I know don't live in McMansions in Lake St. Louis. You're living in a shitty apartment in South City. These are real issues," Burleigh says. "Except for Nelly, everybody who swings a guitar in St. Louis is solidly working class."

The band is playing Friday evening, along with reggae sensation Aaron Kamm and the One Drops, Zagk Gibbons, and a touring band from Ohio called Automagik. The music starts at 5:30 p.m., after the Labor Solidarity March at 4 p.m. Saturday's entertainment is Little Big Bangs at 6, Humdrum at 7, and blues duo Bootigrabbers Delight at 8. Lott says he's looking at Scene of Irony and Opposites Attack for next weekend, though nothing is firmed up yet. The music won't go past 10 p.m,, which is the park's official curfew, when occupiers are fair game for arrest by the St. Louis Police Department.

Local spitter Tef Poe, was on tour with the Force and hasn't made it down to Kiener Plaza yet, says now that he's back and rested, you'll be seeing him on the front lines. "My life is weird because I'm just as active in the political community as I am in the hip-hop community. Some of my activist friends probably don't even realize exactly how much value my name holds in the hip-hop world," Tef says. "I'm hoping I can use my influence to bring more attention to the issues at hand."

Tef has never shied away from politics in his rhymes. He plans on doing a fifteen minute set sometime tomorrow evening, and says he's not afraid of the legal ramifications of getting involved.

"The fact that we even consider not going to jail tells me a lot about our true intentions," says Tef. "People in Libya have had to join a liberation coalition to help murder a corrupt tyrant. We have the nerve to worry about something as petty as going to jail. How many of us are willing to pick up a machine gun and fight genocide?"

"I think it's important to keep entertainment going every day because there are so many dedicated volunteers here who just need a break, and there are people who are still trying to figure out what we're doing here," says Goodwin. As for what the occupiers need to keep the music going, Lott said they could use someone educated in sound tech to donate their time.

"We have the amps and stuff covered for this weekend, anyone who had a commitment that they could be here every weekend would be awesome. We need people with experience and we just need bodies. We have people who are passionate about doing this, but that doesn't mean we don't need help," says Lott.

"[Music] is the universal language. It helps people connect on a more spiritual level," says Goodwin, to which Lott jokingly replies, "Hippie."

"It's true, it does help people connect," Goodwin says, standing her ground.

"We were just writing a song a while ago. I can't complain," Lott says with a laugh.