Lucinda Williams at the Pageant, 10/12/11: Review and Setlist 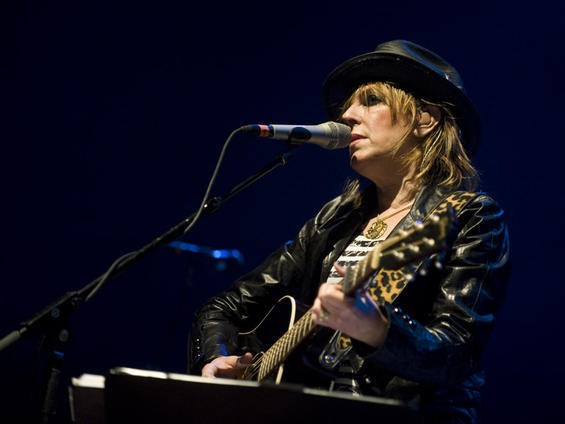 Lucinda Williams | Over the Rhine The Pageant October 12, 2011

Note: If you shot good photos at the show and want to share 'em with our readers, please e-mail versions at least 550p wide, along with your name so we can credit you if we think they're purty. Just be sure to send only pix you personally took. Don't go snagging other people's.

Better Than: Just about anything short of having her come play for you in your living room.

Lucinda Williams passes through St. Louis with reassuring regularity, so it was a little disconcerting when her itinerary in support of Blessed, the CD she released on Lost Highway back in March, didn't route her within 250 miles of here.

Maybe that explains why Williams went out of her way during last night's show at the Pageant to give the audience a few special keepsakes to hold tight to till the next time comes around.

Though it unfolded as a slow burn, the evening propelled itself along on a "We Shall Overcome" undercurrent. "I'm riled up!" Williams announced midway through the set after delivering a rambling shout-out to the Occupy Wall Street Movement, which she hailed as "the greatest thing that's happened in this country in a long time."

Referencing the previous night's Republican presidential candidates' debate, she blasted the party's efforts to deter likely Democratic voters with Draconian photo-ID legislation and ridiculed both Herman Cain's "9-9-9 Plan" and Michele Bachmann's anti-Satanist "6-6-6" rejoinder. "Don't believe the lies of the GOP circus," Williams exhorted, urging her fans to tune in CNN or, better yet, MSNBC, in order to stay informed. "You've got to educate yourself, or else you're going to be trampled! These are dangerous times," she warned.

Then she and her three-piece backing band launched into a blazing rendition of "Joy" -- perhaps her best-known song and one that, in light of its introduction, took on fresh resonance:

I don't want you any more You took my joy

The two-hour set had begun at nine o'clock and meandered around in the artist's thick songbook (which covers more than 30 years), gaining momentum as it went and indulging in a few side trips through unfamiliar -- and, on two occasions, essentially uncharted -- territory.

The first of the night's big surprises came early on, when Williams introduced "a song I wrote for Blessed that didn't make it on the record -- it'll be on the next album" and let on that "this is the first time. We just worked it up at soundcheck."

Titled "Stowaway in Your Heart," the new song is a stripped-down declaration of love addressed to the singer's husband (and manager), Tom Overby. Though unabashed, "Stowaway" avoids mawkishness in melody and lyric alike, a welcome contrast to "Sweet Love," an ode to Overby that stands out as one of Blessed's few weak cuts.

Williams didn't include "Sweet Love" in last night's set, but it may be no coincidence that, once the band had stepped up the pace some, she reached back for 1998's "Changed the Locks," providing an illuminating counterpoint to "Stowaway" in its insistent, repetitive structure and parallel imagery. One's about coming and the other going, but both songs build force in the same fashion, and then close by cutting loose a litany of each verse's first line:

Between them, Blessed and Car Wheels on a Gravel Road (the album that pushed Williams from relative alt-country obscurity to object of near-universal critical acclaim in 1998) provided nine of the evening's twenty-two songs -- half the material if you subtract the set's three covers.

One of those covers provided the show's second singular moment, as Williams performed a gorgeously unadorned "Tryin' to Get to Heaven Before They Close the Door," explaining that she'd recently recorded the song as her contribution to a forthcoming Bob Dylan tribute CD that will benefit Amnesty International.

The other two covers closed the show: One was a smoking version of the early Allman Brothers Band blueser "It's Not My Cross to Bear" that tested the lowest reaches of Williams' vocal register and showcased the striking talent of the band's new guitarist. Over the course of the evening, the many skills of Blake Mills had not gone unrecognized by audience members, a number of whom marveled at the 24-year-old's mastery. The lights came up after Buffalo Springfield's "For What It's Worth," a song that doubly suited Williams' purposes, melding well with her worn-in singing voice and providing ample 1960s-style sing-along fodder to drive home the artist's voluble rabble rousing.

Opener: Over the Rhine joins Williams for this leg of her tour. Husband-wife team Linford Detweiler and Karin Bergquist took their name from a then-downtrodden neighborhood near downtown Cincinnati. That was more than twenty years ago. They've been recording ever since, to consistent indie acclaim. This year they released The Long Surrender on their own label, Great Speckled Dog, with funds provided by their fans. It's produced by Joe Henry and includes a vocal visit from Lucinda Williams. If you like her (and Joe Henry), you're bound to like them.

Notes and setlist are on the next page. Quotes: "This is a song I haven't done in a while." (introducing "Price to Pay," a country-tinged cut from Williams' self-titled 1988 breakout LP that hasn't been a live-show staple in recent years)

"This is about the same guy I wrote 'Jailhouse Tears' about. It's the only bad-boy song on the new album. I guess I still had some left in my system." (introducing "Buttercup," off Blessed)

"The song is called 'Copen-hah-gen.' Or 'Copen-hey-gen,' which is how you pronounce it, which I learned when I heard someone say it who's from there. But it's too late -- the song's already written." (introducing "Copenhagen," a sad song off Blessed about the death of her manager, Frank Callari, that has the distinction of being Williams' first-ever music video -- made by Dave Willis, one of the warped minds behind Cartoon Network's Squidbillies)

"I just received word that the Cardinals won." (about fifteen minutes after the end of NLCS Game Three, and a good five minutes after an audience member blurted the news -- politely during a break between songs -- sparking a brief bout of shouts and cheers among the crowd that interrupted Williams as she was introducing the next song)

"Power to the people! Peace, love and revolution!" (parting words)

Overheard: "Isn't she great? I see her every time she's in town!"

"She doesn't even know who the Cardinals are. But that's cool."

"Are you reviewing the show?"

"'Power to the people! Peace, love and revolution!' Write that down!"

Personal Bias: 1) The first time I saw Lucinda Williams was at the Stephen Talkhouse (long since gone) in Miami Beach, in 1992. She came back six months later to open for Joe Ely, and so did I. Come back, I mean. I have yet to open for Joe Ely. But I see her pretty much every time she's in town, even though I didn't say that to anybody last night. 2) "Tryin' to Get to Heaven Before They Close the Door" made my knees shake some. Yes, I have a weakness for Bob Dylan, and that song in particular. Though not so much when Bowie sings it. Yes, David Bowie covered "Tryin' to Get to Heaven Before They Close the Door." Robyn Hitchcock did too (frickin' YouTube). Better than Bowie, but Williams was better. And when she got to the part that goes, "When I was in Missouri/They would not let me be/I had to leave there in a hurry/I only saw what they let me see," everyone hooted. 3) I had to work late and missed Over the Rhine's set. Not too happy about that, because they really are good.

20. Blessed 21. It's Not My Cross to Bear (Allman Brothers Band cover) 22. For What It's Worth (Buffalo Springfield cover)