What Is That Smell? The Five Most Inexplicable Musician Fragrances 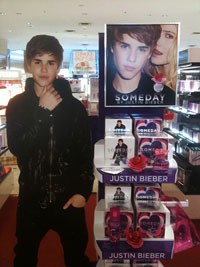 Launching a fragrance has become part of the formula for marketing oneself today. It just seems to be a natural step managers are now pushing their clients to pursue. It's all a part of some weird pursuit of going from a person to an actual brand (home girl J-Lo went from being Jenny on the block to Jennifer Lopez, Inc.)

But just because it's on some checklist doesn't mean it works for everyone. And there are some musicians, in particular, who couldn't resist the call of the manufactured scent but should have. We at RFT Music decided to explore a few examples.

5. Rihanna: This good girl gone bad now has a perfume out called Reb'l Fleur. Isn't it enough you've been named this year's "Sexiest Woman Alive" by Esquire? We're not being haters, but maybe try putting out some better music for us to grind dance to. And yes, we're aware that her latest album Loud has three no. 1 singles on it. That doesn't mean the album as a whole was worth the money we paid for it.

What it should smell like: Sex. And mangos (she's from Barbados, no?)

4. 50 Cent: 50's look has kind of improved since trading in the white t's for the mobster suits, but we're still not convinced he's got enough style to push his own scent on the world. Also, why isn't it just called Cent? Missed opportunity.

3. Jessica Simpson: What happened to Jessica Simpson? The talented popstress turned Mrs. Nick Lachey turned ex-Mrs. Lachey kind of fizzled in front of our very (indifferent) eyes. Maybe a perfume isn't that bad of an idea for someone whose career highlights include being Tony Romo's girlfriend.

What it should smell like: Jess is a southern girl at heart who probably has a soft spot for ribs (and maybe it'll be just the trick to lure your own man with a hearty appetite who'll stick around).

2. Sex Pistols: The Sex Pistols fragrance is a unisex scent first launched in Paris and now available in the U.S. Etat Libre d'Orange, a Paris-based perfume brand, licensed the band's name from its merchandising partner Live Nation Merchandise. So Johnny Rotten & co. actually know this thing exists...and it appears as though they endorse it. Michael Krassner, executive VP of worldwide retail and licensing for Live Nation Merchandise, told Billboard.com that the band members are "closely involved" with licensing decisions. Huh. Apparently punks know no gender -- and they care about how they smell. Who'd have thought?

What it should smell like: Sweat, old beer and anarchy.

1. Justin Beiber: The following should be a general rule of thumb: No one who has yet to make it to the other side of puberty should be allowed to launch a fragrance. Period. No exceptions. Including/especially Justin Beiber. What self-respecting woman wants to douse herself in a perfume that's surely made of billions of pre-teen tears collected across the globe? Also, what in God's name is up with the poster for this latest Beiber merchandise? Is that adult woman whispering in his ear meant to be his mother? Either way, it's all sorts of wrong.

What it should smell like: Laundry detergent, warm vanilla, honey and unicorn farts.