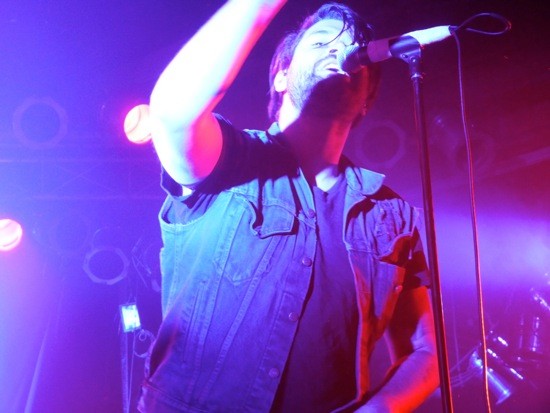 Adam Lazzara has always smiled more than any of his peers. But this is different. He's ambling the stage at Pop's, shouting his lyrics like it's a circus trick he's suppressed into some sort of automatic, subconscious routine. He never took himself too seriously, but something important has changed. That grin used to be almost confrontational. Oh, do these crazy bleeding outpourings make you uncomfortable? But the aim has changed. They make him uncomfortable now, and where does that leave the 800 or so people fist-pumping along in Sauget?

Taking Back Sunday is back to its most beloved lineup, the one responsible for third-wave emo benchmark Tell All Your Friends, the rift that so separated these dudes that none of them would actually talk about what happened apparently healed. TAYF got a reissue and John Nolan and Adam Lazzara went on a buddy tour of the press circuit, laughing and playing acoustic versions of the songs that anchor both men's careers. And this is no empty ploy for a payday - the band has clearly found a third (or fourth....fifth, even) wind. Last night, the rapport between Lazzara and Nolan, especially, was palpable.

But that obviously means they've all been able to put whatever burned them back in 2003 to bed, and, this being emo, that was also the exact sort of stuff that gave these songs their heft. So now we have a straight-up rock band, clicking on all musical cylinders, writing some of its best hooks and riffs ever, totally unable to deliver angst with a straight face.

Which is ordinarily fine, except when you're still singing lines like "The truth is you could slit my throat/And with my one last gasping breath/I'd apologize for bleeding on your shirt" and visibly thinking to yourself how ridiculous that sounds. Before playing "MakeDamnSure," Lazzara cleared up any confusion that might have lingered by saying, "It's weird to be so emotionally naked in front of all these strangers" and then, after conceding that these kids pressed against the barrier screaming the lines right with him are just as exposed, thanking the crowd.

"I guess I should have just said that. Next time I don't need to go into the existential crisis I'm having as we're playing."

The crowd, in general, didn't waste much time feeling cheated. Why bother? The songs still sounded as good as ever - better, in many cases, as this band is now capable of airtight musicianship and plenty of the songs in its catalogue absolutely soar. As we start to gain some distance from the mid-aughts emo deluge, the vitriol it earned from so many observers seems less and less pertinent. This stuff did not, in fact, become the new paradigm in rock and roll, and in any case it's better than Train. The torchbearer of that final, LiveJournal and melody-fueled pop-punk surge, is... Drake, maybe. And we all have bigger problems. So maybe Taking Back Sunday has the right idea, just enjoying the ride.

Notes and setlist on next page.

Personal Bias: The last time I saw TBS was in 2006, also at Pop's, and it was fantastic. Adam Lazzara appears to have aged about ten years in the intervening five.

Overheard: "Just play a song!" during that aforementioned existential crisis. Overall, I think people had a good time, but I definitely wasn't the only one wishing for simpler times.

El Paso Error: Operator You Know How I Do Faith (When I Let You Down) Liar (It Takes One To Know One) Bike Scene One-Eighty By Summer Existentialism On Prom Night (Straylight Run Cover) What's It Feel Like To Be A Ghost A Decade Under The Influence This Is All Now You're So Last Summer Timberwolves At New Jersey You've Got Me (new song) MakeDamnSure Cute Without The E Encore Ghost Man On Third There's No "I" In Team