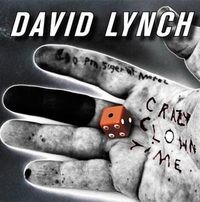 Really, you don't need to know much more than that the song is called "Crazy Clown Time" and that it is the second song to emerge from David Lynch's upcoming solo record of the same name. And rest assured, he does that title justice, chirping smirkingly innocent small town frolics over warped guitar, buried chatter and sex moans. Sample lyrics: "Danny poured the beer all over Sally (moan)/But he screamed so loud he spit/We all ran around the back yard (moan, moan)/It was crazy clown time. Crazy clooown tiiiime/It was crazy clown time/Crazy cloown tiime/It was crazy clown time/It was real fun." Listen below, as long as it's still light outside and there are other people around.

Crazy Clown Time comes out on November 8th. It was written, produced and recorded by Lynch and engineered by Dean Hurley. Karen O will appear on at least one track, "Pinky's Dream." And in retrospect, that headline might be a bit hasty. This is the first time Lynch has embarked on a musical project of his own, though he's been collaborating with other musicians for years.