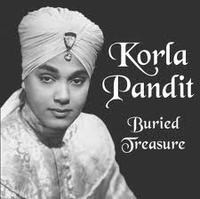 Fantasizing about being somewhere else isn't a new concept. And as Americans moved into suburbs that took boredom and conformity to new heights, daydreaming about distant locales became a commodity.

Indeed, the suburbanizing 1950s featured a wave of music glamorizing distant destinations in Asia and Oceania. Dubbed "exotica" based off Martin Denny's album of the same name, the genre featured musical interpretations of these seemingly out-of-reach places. The website Hip Wax perhaps put it best when it described exotica as "a narrow slice of popular music or mood jazz" aimed at conveying "the non-native, inauthentic experience of Oceania." While Denny may have popularized the genre, St. Louis native John Roland Redd -- better known to the masses as Korla Pandit -- was known the "Godfather of Exotica" thanks to his television appearances. Pandit -- who died on October 2nd thirteen years ago in California -- cemented his place in popular culture by playing whimsical instrumental renditions on his organ.

Pandit let his music do the talking - literally - on a Los Angeles-based television show known as Korla Pandit's Adventures In Music. Wearing a signature turban with a hanging jewel, Pandit played the organ while dazzlingly staring into the camera. It was a forbearer, of sorts, to modern music videos.

Pandit stayed active after his show ended and he faded from public view, even appearing in a cameo role in the incomparable Ed Wood. But Pandit's stamp on musical culture may go beyond helping establish a relatively short-lived musical trend.

Even though he was billed as having a French mother and an Indian father, Pandit, according to a biography entry on an official web site, was actually born in St. Louis in 1921. His father, Rev. Ernest Redd, was an African-American pastor who spent time at the Second Baptist Church in Columbia. Pandit grew up in Hannibal and Columbia before departing the Show Me State. The details of his upbringing came out when RJ Smith wrote an article about Pandit in Los Angeles Magazine:

Korla Pandit was one of the very first blacks to have his own TV show, and he was certainly the first in Los Angeles. The bargain that he made, with the station and with himself, was that nobody would know. Where better to live this way than in Los Angeles, where people are richly rewarded for conjuring fresh identities out of half-truth and a pound of hype? He cultivated the public's curiosity, and he fended it off.

You can read the read the rest of Smith's article here. And you can click here to read more about Pandit's life and influence on his official web site.