After closing its doors twenty years ago, the Peabody Opera House (formerly Kiel Opera House) officially re-opened Saturday night and hosted a posh gala featuring the inimitable Aretha Franklin and comedic heavyweight Jay Leno. From the moment patrons exited their cars, they were met with smiling Peabody staff that seemed genuinely excited as attendees themselves. And of those attendees were some of St. Louis's most prominent voices. From politicians, corporate backers, professional athletes and coaches, movie stars, and regular citizens alike, everyone was ready to re-open a chapter of St. Louis history that the city had been deprived of for far too long.

Local darling, Ellie Kemper--who plays Erin on The Office--hosted the event and graced the crowd with her awkward, yet endearing-as-hell charm. Local media mainstays Art Holliday (KSDK), Johnny Rabbitt (KMOX) and Favazz (KSHE) all offered presentations highlighting the significance St. Louis has had on the world of music and offered personal anecdotes on some of the Opera House's historic shows. Holliday's tribute, specifically, really hammered home the undeniable significant role St. Louis has played in the world of Blues music, with appropriate references to traditional American songs like Frankie and Johnny" and "Stagger Lee"--both of which were penned about events occurring in St. Louis.

After the formal introductions and acknowledgments, the night eventually settled into its featured lineup. Host of The Tonight Show, Jay Leno, delivered roughly forty-five minutes of his predictable comedic observations. Leno offered up easy pop-flies relying on recycled political humor, male vs. female observations and airport security gripes. He even fell back on stale Abu Ghraib prison and Hurricane Katrina jokes. You'd think a guy who's expected to produce new zingers on a nightly basis would have fresher material. To be fair though, Leno did win over the majority of the crowd--most of which were in the 40-60-year old demographic. And he also made a classy move and vowed to kick in $10,000 to The John L. Trotter Multiple Sclerosis Center, which served as the event's charitable partner. 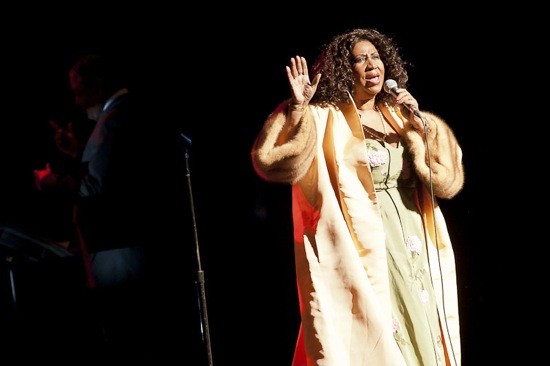 If The Queen of Soul, Aretha Franklin, wasn't the perfect star to celebrate the unveiling of St. Louis's newest concert hall, I don't who would be. Entering stage left, Queen Aretha elegantly strolled up to the microphone donning a flowing green gown with pink flowers. Flanked by a 21-piece ensemble, she slowly assumed the microphone with the same sophistication and classiness that Queen Elizabeth displays when opening Parliament.

And before we knew it, the same booming voice that moved the crowds at Martin Luther King, Jr.'s funeral and President Barak Obama's inauguration ceremony, was now center stage at the Peabody ringing in her set with the uplifting "(Your Love Keeps Lifting Me) Higher and Higher." From there, Franklin belted out a goose-bump-inducing rendition of "Natural Woman," showing off a vocal range that is anything but natural. Although the singer has been battling a mystery illness over the last couple years, Franklin sounded and looked great. And her musicianship hasn't taken a hit at all. Halfway through her set, she sat down behind the piano and played with the same vengeance she brought to her legendary Fillmore West performance in 1971.

Her set featured a few surprise guests as well. Dennis Edwards of The Temptations hopped on stage and helped deliver an impressive take on "You've Got a Friend" a song Franklin originally sang with a different St. Louisan, Ron Isley. Edwards did a serviceable job at filling Isley's shoes, and the chemistry between him and Aretha was undeniable. Shortly after, Franklin also ushered out "The King of Rock n'Roll" Chuck Berry, who made a brief appearance and shuffled back off the stage, leaving fans hope of a collab in the dust.

Hat tip to the fine folks at The Peabody. After taking in this aristocratic gala, it will be interesting to see how the vibe differs at Tuesday night's Wilco concert. Something tells me there will be fewer suits and more second hand smoke. Regardless, the overwhelming sense of elegance and grand spirit housed in the beautifully renovated Peabody won't go anywhere.

Notes and Aretha Franklin's setlist on the next page. Overheard: "It's amazing what a little Spic 'n Span and $79 million can do." -Mayor Francis Slay during his speech. "Even the limestone bears mounted in front of the Peabody are smiling." -Multiple people when referencing the undeniable spirit that consumed the night. "The blues are still very alive in St. Louis." -Cheesy, but accurate, declaration by David Checketts, Chairman of Peabody Opera House. Aretha Franklin Setlist (Your Love Keeps Lifting Me) Higher and Higher Natural Woman Think Baby I Love You Don't Play That Song Sweet Sixteen Chain of Fools How Long I've Been Waiting Moody's Mood ?? I Adore You You've Got a Friend Bridge Over Troubled Water Freeway