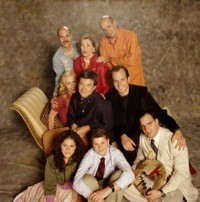 The single-camera sitcom to which all other single-camera sitcoms must answer is almost certainly, no-really-this-time-we-promise, coming back. And it's not just a movie, as has been rumored since Ron Howard's only on-screen appearance at the very end of the show's final episode. No, we allegedly get a short season updating us on the progress of each character in turn plus a movie! Huzzah!

The Bluths aren't exactly a musical family, but nearly every character performed at least once during the show's initial run. Below, we bring you the Bluth family's top ten forays into song. Note: All images appear courtesy of Fox and Hulu.

Mom says it's too windy.

9. The word he was looking for was creepy. Season 2, Episode 6: Afternoon Delight

8. Gob has an epiphany. Season 2, Episode 18: The Righteous Brothers

7. Leather daddy gets a gig. Season 1, Episode 9: Storming The Castle

Well...you....should...always read the label, you should always read it well, in the most delicious way! 4. Tobias looks for work. Season 1, Episode 1: Pilot

Hello, my name is Dr. Tobias Funke. I was Chief Resident of Psychiatry at Mass General for two years, and I did my fellowship in psycholinguistics at M.I.T . And this is "I'm A Bad, Bad, Man" from Annie Get Your Gun.

I tried to express something to you in some of those numbers. And maybe, just maybe, heal this country a little bit.

You're out of the band.