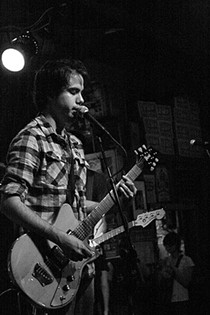 Those of you who went to An Undercover Weekend on September 10 might have noticed that Collin Christopher was not singing for the Breaks. As it turns out, he left the garage rock band before the performance. Christopher, whose real last name is Preciado, announced his departure in a facebook note, which cited shifting priorities and creative differences as his reasons for leaving. "The focus on my advertising career went front and center, and I lacked the energy to show any enthusiasm for my reduced role in the band," reads one passage. The note mentions that he feels the split "was handled poorly," but it also says that Christopher is still rooting for the Breaks. "I want this band to succeed," he writes. "I love every one of those guys (yep, even Karl and Matt, I know right?) and I want the band to blow up." Christopher ends the statement by revealing that he will "start working casually on a smaller project" that will be "much more subdued" than the Breaks. When reached for a follow up, Christopher declined any further comment.

The Breaks also declined an interview but wrote a short response regarding the lineup change:

I think it's fair to say that none of the Breaks were particularly happy about the manner of Collin's departure, including Collin. It was a difficult situation for everyone. We are looking forward to figuring out the new lineup and what's next. We'll let everyone know what's going on soon. Stay with us!

As of now, there are no shows scheduled for the Breaks, who we recently declared the best new band in St. Louis.