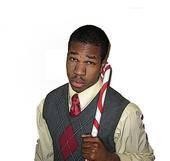 It's an impressive duality that reflects the emerging movement of dorm room rappers. National headliners like J. Cole and local stars like Prince Ea have illuminated the trail between college campuses and hip-hop stages, slowly shifting the popular perception of what it means to be a rapper. Entelleckt, whose real name is Michael Wyatt, walks the beginning steps of that trail, his days still more consumed by term papers and pop quizzes than by shows and record sales. But with his oscillating flow and feel-good hooks, he's developed a growing internet following. He's in the rising action of his career, a string of breaks from blowing up, inching closer with every new listener.

Entelleckt's lyrics are rooted in introspection, a product of his nomadic childhood. His father, an engineer, moved the family where his work took them, from Alabama to South Carolina to Virginia to Mississippi to Texas to Alabama again to Edmonton, Canada to Texas again, then to O'Fallon, Missouri for Entelleckt's senior year of high school. A perpetual new guy, Entelleckt balanced his shifting environment with the constancy of his own mind, finding routine in reflection and learning. His music is a public manifestation of this stream of consciousness, an intimate exploration of past experiences, present aspirations and future possibilities.

In "My Way Home," from his second mixtape The Odin Passion Project (The O.P.P.), he raps:

"I'm from everywhere and nowhere, no city limits/ I can't even get homesick, no home to visit/ Or maybe everywhere's my home, just worldly living/ Or maybe i can't find a home in this world we live in/ One thing that I know for sure this music keeps me driven/ A day without music for me is like living in prison/ Studio inside my cell that means I'm living large/ I'm in that four by four cage, sixteen bars..."

While the theme is constant, it stays fresh because of the diversity of deliveries he uses to convey his message. Through his two mixtapes, Music is My Life and The O.P.P., Entelleckt shifts among dense staccato bursts, soulful sing-song couplets, and pitchy vowel-stretching bars. He matches his flow to the mood of the song.

Entelleckt is at his best, though, when he sews the style together in the same verse, as he does in "On My Way" and "Blow." The result is a nuanced verse structure driven by unpredictable rhyme schemes with refreshing pauses and pace changes.

He first started rapping his freshman year in college.

"In Rolla there's not a lot to do," he says with a chuckle. "There's not even a lot of women."

He wrote his first song to try to impress a girl he liked. He didn't get the girl, but he did find a passion. Soon he was constructing bars and melodies in his head all day.

He used his internship money on recording equipment. So he makes most of his own beats-- usually 808-style thumps, syths, and piano that often create an interesting sonic dissonance with the early 90s-flavored melodies laid on top, as in "Control" and "Nowhere."

But his latest single, "Gravity," has a more soulful sound, as Entelleckt, a saxophone player since middle school, strums the guitar that carries the beat. It may signal a new direction for the mixtape he's currently working on, "Larry Yolo," which he plans to release this winter.

And then in the spring, he'll graduate.