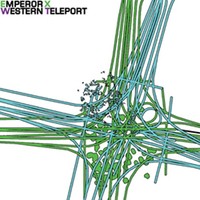 Ed: The St. Louis node has been found! Thanks to the enterprising work of some local explorer, we can all hear our very own buried b-side: "Lagos Comdec." So far, of the 41 nodes buried around the country, only six have been found.

These are exciting times for Chad Matheny, the nomadic artist who has been generating bookish spazz-folk under the moniker Emperor X since 1998. After a half decade of sporadic small run-releases (like palindromic cassette tapes and one-sided LPs), and disastrous tours (such as the two unrelated treks that stranded him in the same border town of Blythe, California), Chad's persistence is finally paying dividends. On October 4, Bar/None Records will be releasing his long-awaited full length Western Teleport, which sounds like Sufjan Stevens' Illinois record undergoing shock therapy.

Emperor X will be performing at the Biliken Club on Friday, October 7. Matheny is currently settled in Los Angeles, but he has a well-known soft spot for St. Louis. He lived in the area for half of 2009 and references the Arch on the fantastic (and freely downloadable) pseudo-title track "Erica Western Teleport".

To celebrate the new album and spread his geographic love, Chad is including St. Louis in a special project called Western Teleport Nodes. Translucent purple cassette tapes have been hidden throughout the country and their GPS coordinates are posted on westernteleport.com. Each tape contains an unreleased b-side from the album and a secret code that, when typed into the website, will unlock the song for the general public. Every buried tape is the only physical copy of the track in existence, and if a tape is not found or its contents not unlocked, the song will remain unreleased. Forever.

The St. Louis "node" of the national Emperor X treasure hunt is hidden at GPS location 38.643,-90.298 with the clue "Sam Fox School of Art, Look under mutant picnic tables." Find the tape, release the song from its encrypted prison, and we'll post a link to our city's own Emperor X b-side. Get your smart phone navigation apps loading, dust off the Sony Walkman, and start digging!