Psychedelic Furs and Tom Tom Club at The Pageant, 9/23/11: Review and Setlists 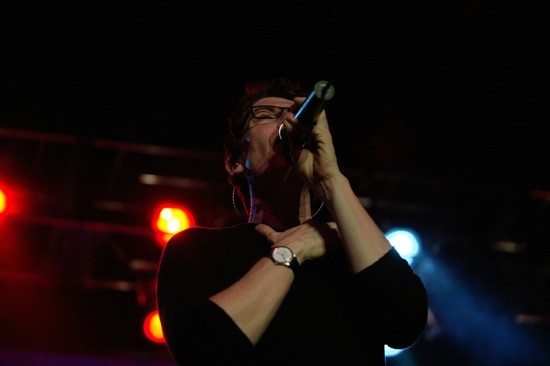 Well? What do you consider fun?

In his latest book, Retromania, author/theorist Simon Reynolds explores pop music's current obsession with its past. We're all familiar with bands reforming to play a classic album in its entirety -- the All Tomorrow's Parties syndrome, if you will. According to Reynolds, though, some take it one step further: actually recreating concert bills, club atmospheres, and (in one extreme case) a full day of school, complete with the original teachers and as many students as could be corralled.

At what point can we actually conjure the past? More specifically, what does the past have to tell us now? Or is even worth going through all that trouble and making all those awkward phone calls to retired teachers?

Take the Raincoats: at its Chicago show this week, the band was able to wring new meanings and contexts out of 30-year-old songs just by connecting with a new crowd and the members being themselves. Or, to bring it back to the matter at hand, take the current Psychedelic Furs/Tom Tom Club tour that pulled into The Pageant last night, which succeeded in its own low-key way.

Tom Tom Club has been around in some form since 1981, when Talking Heads' rhythm section Tina Weymouth and Chris Frantz decamped to the Bahamas in the wake of Remain In Light. The result: a series of buoyant, frothy singles, including "Genius of Love" (a.k.a. The Catchiest Sample Ever) and "Wordy Rappinghood" (later remade electroclash-style by Chicks on Speed). Last seen locally in 1990 at the Fabulous Fox, Tom Tom Club made a long-overdue return to St. Louis after cancelling a show at Old Rock House last year. Weymouth called the night a celebration of "thirty years of Eighties music."

From the very first note, Tom Tom Club brought us back to Olde Lower Manhattan the way it once was. "Punk Lolita" and "Don't Say No" conjured up a land of high crime, low rents, not an upscale gallery or cupcakery in eyesight, and Brooklyn as a distant bridge-and-tunnel borough. Weymouth was amazingly energetic and youthful -- leading the crowd in a singalong on "L'Elefant," dancing around onstage with vocalist Victoria Clamp and, at one point, playing bass on her back. Bruce Martin held down the squelchy synth sounds and Latin percussion familiar from the recordings, and Pablo Martine's scratchy guitar parts would have fit perfectly into Remain In Light next to Adrian Belew. Frantz (who looks eerily like former President Bill Clinton now) played bandleader from behind his drums, occasionally barking out lyrics in his bullfrog voice. Meanwhile, Kid Ginseng (aka Frantz and Weymouth's son) provided scratches and sampling from offstage. It was an amazingly solid set: they saved "Genius" and "Wordy Rappinghood" for the second half of the set, but honestly, they proved that their whole catalog is equally pleasing. A cover of Hot Chocolate's "You Sexy Thing" fit in well. They closed with a couple of nods to their Heads days: "Take Me To The River" and "Psycho Killer." Weymouth sang that last one, and it felt a little odd, given the legendary hard feelings between David Byrne and the rest of his former band. Nonetheless, Tom Tom Club couldn't have been more fun to see and hear. Maybe it could come back before 2032.

These days, Psychedelic Furs is down to just two original members: singer Richard Butler and his brother, bassist Tim. However, as long as you've got Butler's trademark rich, sneering baritone, you've pretty much preserved the essential ingredient. And to its credit, the rest of the 2011 Furs are hardly anonymous session musos: keyboardist Amanda Kramer has done time in the Golden Palominos and Information Society, and saxophonist/clarinetist Mars Williams has been an on-and-off member since 1983, occasionally taking breaks to play with the Waitresses (that's his sax in "I Know What Boys Like") and Power Station. For half the set, local legend Richard Fortus joined in on guitar, beefing up the sound considerably.

Richard Butler: a man made for the stage. He's half Leonard Cohen, half '77 punk ranter. No one sings the words "stupid" or "useless" like this man. During each song, he'd make grandiose gestures, pirouette, shake hands with the crowd, take bows, and seemingly luxuriate in every cynical lyric. Then, at the end of each song, he'd mumble a half-giggled "thankya!" and bounce in place, suddenly lost for words and anxious for the next song to begin. It was as if he couldn't assume his "Richard Butler" persona without his backing band providing the music. It was one of the oddest tics I've ever seen in a lead singer, although endearing.

Yes, the Furs played "Pretty in Pink," as well as such alt-rock staples as "Heaven" and "Love My Way." However, the bulk of the set consisted of deep cuts, and even "Believe" from Butlers' Love Spit Love days. It all began to blend together after awhile; one wished for "President Gas," which would have been just as topical now as ever, or the eerie "Sister Europe," or the celebratory "We Love You." Nonetheless, this was a no-nonsense set from beginning to end, not some obnoxious Eighties Night at the local bar. Retromania could wait until another day. Notes and setlist on the next page. Critic's Notebook: - In addition to being a local hero, Fortus played with the Butler brothers in Love Spit Love, making his appearance a reunion of sorts.

- Concertgoers in Valley Girl-esque drag: only two that I saw.