Erasure And Frankmusik At The Pageant, 9/21/11: Review And Setlist 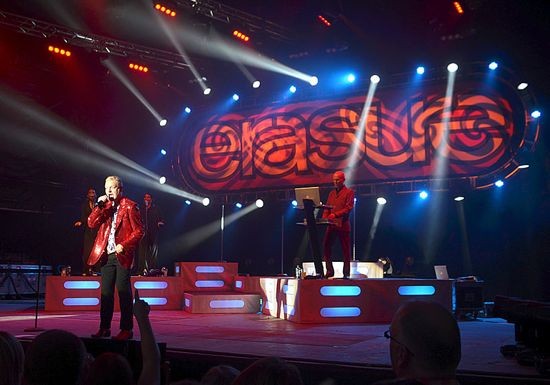 It's been over two decades since Erasure played St. Louis, and its fans were more than ready for the band's return.

Opener Frankmusik and his drummer and keyboardist took the stage amidst Erasure's gargoyles and cages. The British vocalist introduced himself, promising a blend of originals and old favorite by the likes of Whitney Houston and Paul Simon. And he delivered, blending his works with snippets of songs spanning thirty years of pop music. Frankmusik provides the experience of a DJ spin performed mostly live in a stripped-down set with little fanfare, seeming a bit out of place among the stage settings.

Erasure made up for the lack of theatrics. Vocalist Andy Bell presented at center stage, clad in a hot pink sequined blazer and a black glitter gladiator helmet. He was flanked on either side by female living statues dressed in black pants, sparkling red corsets, and cockscombs of black feathers along their heads, mimicking the silhouette of Bell's helmet. Vince Clarke, in red sequins, took his spot behind a red-eyed gargoyle that concealed his synthesizer. The statues burst into life, singing backup vocals on show opener Sono Luminus.

Always showcased Bell's strong vocals, which haven't faded over the years. His falsetto's deepened as the years have passed but remains velvet smooth. The deeper tone might have been temporary, as he apologized later for being hoarse. Later in the show his voice showed some wear, but for the most part remained as emotive and and soulful as it was twenty-five years ago.

Two songs in, Bell complained of the "pock marks" the reflection of his blazer left on his face, shedding it -- the helmet disappeared after the first song -- down to a black vest with corset lacing running up the back, revealing a well-toned body. He commented on this being Erasure's first St. Louis show in over twenty years. "And we're not waiting another twenty years because I'll be pushing fifty by then," says the 47-year-old singer before launching into When I Start (To Break it All Down), followed by a soaring take on Blue Savannah that ended with Bell calling, "Yeah! Meet me in St. Louis!" while windmilling his arms and bounding across the stage in a manner that defies the double hip replacement he received during the band's hiatus.

Erasure's touring to support Tomorrow's World, its first new album since 2007. New song "Fill Us With Fire" retains much of the band's classic sound but with the mature edge of dark beats and a richness to Bell's soaring voice that he probably couldn't have done as the 21-year-old who hit the high notes in Who Needs Love Like That.

Bell continued his vocal embrace through "Drama!", bringing it to an apex during the new "You've Got To Save Me Right Now", which left him in a howling a capella three-part harmony with the backup singers.

They took the energy straight into "Ship of Fools". Always one of the band's darker songs, it's now a little slower and deeper, devoid of much of its original pop sparkle. As it should be for a band that's been had a few decades to grow. If the group performed the song just as it did when it was new, 24 years ago, Erasure would be a nostalgia act. Its ability to infuse the beloved classics with the weight of twenty years without abandoning the trademark melodies, vocals, and synthpop shimmer is what keeps them relevant.

Not that it was all seriousness. While Bell waved and played to the audience, the backup singers and Clarke went through choreographed moves and motions with smiles and giggles, keeping the set feeling stilted despite playing the same setlist every night. As for the audience, they were serious about dancing. The floor was a bobbing throb, while the crowd in the balcony created a swaying wave.

"There comes a time in a girl's life when she's gotta be free from addiction," Bell announced after "Chorus". Clarke emerged with a pair of scissors, snipping the corset strings from Bell's back. The singer slipped into a sleeveless, Bedazzled Michael Jackson t-shirt with glittered sunglasses to match for the longing intensity of "Breathe"

For the middle of the set, Clarke left his synthesizer, coming forward with an acoustic guitar with the audio programmed through the synth for "Victim of Love" and "Alien". The effect was soft and scratchy, the scrape of steel strings amplified.

By "Love to Hate You", they returned to the synthpop bounce with a fired-up crowd that sang along, ascending in volume through the song's climbing chorus, which continued through the three-hit whallop at the end of the set.

The backup singers took over for the opening of "Chains of Love" and chiming in when Bell's voice showed any sign of faltering. Although at this point, the massive energy exchange between audience and performers overshadowed any slight flaws. The frenzy continued through "Sometimes", sliding right into the much-anticipating closer, "A Little Respect". Twenty years of fan energy channeled into one song, turning the Pageant into a frenetic, joyous bounce house filled with singers, heads thrown back, calling for a little respect along with Bell.

And it was deserved.

Personal Bias: I started listening to Erasure in high school in the 1980s. Growing up in a small town, I never got to see them in concert until now.

Sono Luminus Always When I Start To (Break It All Down) Blue Savannah Fill Us With Fire Drama! You've Got To Save Me Right Now Ship Of Fools Chorus Breathe Victim Of Love Alien Hideaway Love To Hate You I Lose Myself A Whole Lotta Love Run Riot Breath Of Life Chains Of Love Sometimes A Little Respect Encore Oh L'Amour Stop!