The Year Punk Broke Finally Gets Reissued: Where The Featured Bands Are Today 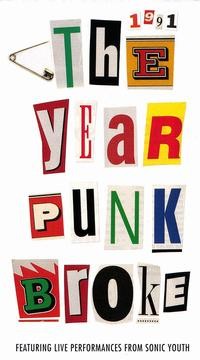 About twenty years ago, Sonic Youth's Thurston Moore asked his friend, filmmaker Dave Markey, to document the band's short European tour, including its performance at the massive Reading Festival.

Markey (best known for his underground classic Desperate Teenage Lovedolls) left with his passport, a camera and a suitcase full of Super 8 film. When he returned he had nine hours of raw footage and the makings of the best visual documentary of 1990s indie rock before the grunge explosion. The film features many indie bands in their prime, including Nirvana, Dinosaur Jr and Babes in Toyland. It's sort of the video companion to Michael Azerrad's Our Band Could Be Your Life.

1991: The Year Punk Broke existed for years as an out-of-print VHS with a cult following, but it was finally released on DVD last week. The DVD release contains the original documentary and a shit-load of extra features, including more than an hour of interviews, bonus footage and rough edits.

Lovingly described by Moore as a "home movie," TYPB is gritty, shaky and absolutely perfect. Live concert footage is spliced with scenes of the bands shopping, eating, exploring various cities and just kind of hanging out. Sonic Youth serves as the main subject of the documentary, with Moore emerging as particularly hammy and entertaining. (See: Thurstonitis)

To truly understand TYPB, viewers must first watch Madonna's Truth or Dare. Madge's classic black and white tour doc had just been released at the time and it was a major moment in pop culture. There are many skits and inside jokes included in TYPB that reference Truth or Dare. (Including a brilliant scene where Kurt Cobain plays the role of Kevin Costner.)

In the two decades that have passed since 1991, grunge took over and indie stopped meaning anything. But what has all this change wrought on the specific bands featured in 1991: The Year Punk Broke? We check in on some of the featured personalities below:

Sonic Youth The doc was filmed one year after the release of Goo, but still before the release of Dirty. In the film, the members of Sonic Youth come off as just a little bit older, cooler and more harder-working than their peers. This has never changed. Sonic Youth will forever be populated with people that seem like cool older brother/sister-types. And they've become even more prolific: the band has released nine studio albums since the documentary, and the members have embarked on countless solo projects ranging from music to books to photography to art to fashion. Sonic Youth has always been a band that stood on a well-earned mountain of cred, and this has only become more true over time. Still, it is totally shocking that the band is still as well-respected and, well, as good as it was twenty years ago.

Babes in Toyland The Babes were fresh off of a tour with Sonic Youth and seemed to be extra feisty. The band only had one song featured on the video, but it was the tribal and violent "Dustcake Boy." This song is one of the better examples of singer Kat Bjelland's trademark angry leopard-like yelps. Babes released its biggest album, Fontanelle, in 1992 and had a couple more albums after that before calling it quits. There have been a few reunion shows, but the most interesting story to come out of the demise of Babes in Toyland is what happened to Kat Bjelland. Anyone familiar with Bjelland's work would should not be surprised to find out that she began to suffer from multiple personalities and was diagnosed as schizophrenic in 2007. She spent a year under medical mental care and came out just as stubborn and creative and badass, releasing albums with her new band, Katastrophy Wife.

Joe Cole Mr. Cole was not in a band included in TYPB, but it is fitting that he was included in the film. Cole was known as a roadie for Black Flag, the best friend of Henry Rollins and was a cheerleader for seemingly every band on the SST roster. He can be seen in the background many times, and there is one long shot of his face, watching a band from the side of the stage, radiantly happy with his arms around his girlfriend, Michelle Leon of Babes in Toyland. Tragically, Cole was shot and killed just a few months after this summer in a random act of violence in Los Angeles. Sonic Youth, Henry Rollins and Hole all dedicated future works to his memory.

Nirvana We all know what happened with Nirvana. Mere milliseconds after Markey wrapped filming, the whole world fell into Nirvanamania. The little band would soon eclipse its heroes, becoming the biggest thing that happened to popular music that decade. Amazingly, Markey manages to capture a side of Nirvana that the general public would never know: the happy side. In TYPB, the band members are still relatively unknown. They are wide-eyed and playful, with frequent smiles and passionate stage show. But that levity was lost when the fame came along. The band would only release one more studio album, In Utero, before singer Kurt Cobain committed suicide. Drummer Dave Grohl went on to form the ultra-successful Foo Fighters and bassist Krist Novoselic expanded his interests from music to politics, even running for office in his home state of Washington.

Courtney Love Miss Love can be seen in the original doc (and in the extra footage) trying to get the attention of cameraman Markey. Her role in the video is very small- she wasn't performing, she was in England to hang out with Billy Corgan of Smashing Pumpkins. Of course, she went on to marry Cobain of Nirvana and the two became the Sid & Nancy of the '90s. Love's band Hole was also on the verge of fame, having released its debut album, Pretty on the Inside, in August of '91. Hole went on to release a few more albums, including the highly successful Live Through This in 1994. Love went on to become a famous disaster and the topic of much tabloid speculation.

Dinosaur Jr Dinosaur Jr was always bigger in Europe, due to constantly touring of the Continent. This is most apparent during on of the most beautiful, chill-inducing moments of the film. The band is playing "Freak Scene" and at the very end of the song, the whole dang audience sings along to the all-important line "Cause when I need a friend it's still you." Dino went on to release five more studio albums and the band is still active today (with years of breaks in between). The members have also put out solo albums and they remain some of the mostly highly respected individuals in indie rock.

Mark Arm  Though his band, Mudhoney, wasn't featured in the film, Mark Arm can be seen in several scenes in TYPB. His little blond mop is always bopping around, accenting a goofy smile. Mudhoney was kind of Nirvana before Nirvana was Nirvana, and it certainly had a longer career. The band has put out ten studio albums in its career and is still active (and awesome) today, mostly playing large international festivals.

The Ramones The Ramones were included in The Year Punk Broke, but the band's time in the film was so short and so stiff that it seemed like the Ramones were more included as a tribute to punk elders than as a viable band. Still, the Ramones had one of the most interesting careers in music history. In 1991 the band was already 27 years into its career and it would be another five years before it officially disbanded. After TYPB the band put out three more studio albums, but it didn't much matter. The Ramones were already considered the greatest American punk band.

Gumball  Gumball is the only band included in TYPB that never quite achieved any level of mainstream success. Despite releasing 1991's Special Kiss (featuring both Thurston Moore and members of Teenage Fanclub), Gumball never really caught on with indie audiences and was dropped from its label in 1994 due to disappointing sales. Gumball disbanded shortly after that, but the band members went on to have very successful individual careers. For example, frontman Don Fleming is a noted producer and participated in many other musical indie ventures, including Half Japanese, Dim Stars and The Backbeat Band.