Everything I Need to Know I Learned from Pearl Jam 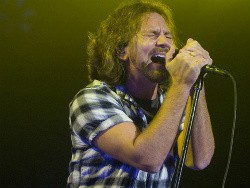 2011 is a year of reflection for generation Xers. It's been twenty years since Nirvana released Nevermind and Eddie Vedder moved to Seattle to front Mookie Blaylock, the band that would become Pearl Jam.

Rock journalist-turned-filmographer Cameron Crowe documented the Seattle grunge innovators' journey in Pearl Jam 20. The film played for one night only with two sold-out showings at the Tivoli Theater last night, drawing hundreds of flannel-clad PJ fans to the Loop. With this many people showing up on a Tuesday night, cheering at the curtain rising like a band was taking the stage, it's easy to understand how Eddie Vedder, Mike McCready, Stone Gossard, Jeff Ament and Matt Cameron manage to fill arenas -- they have some of the most loyal fans in modern music.

Pearl Jam 20 told the history of the band, and while doing so, illuminated how they've managed to stay productive, happy and most importantly, together up to and, hopefully, beyond their platinum anniversary.

Advocating vinyl What better way to maintain relevance in the eyes of your fans than to encourage that they purchase your music in a timeless, tangible format? Like Eddie says, "spin, spin, spin the black circle."

Fighting Ticketmaster While at the time it looked like career suicide, the band's standoff with live music monolith Ticketmaster proves that what doesn't kill you makes you stronger. After the boycott tour (which prevented them from playing all but a few U.S. shows) and later, the decision to play at Ticketmaster venues again, Pearl Jam showed that it cared enough to fight what it saw as unfair treatment of its fans, but it wasn't too proud to acknowledge that not playing wasn't exactly fair to the fans either.

Creating unique setlists Perhaps the smartest thing Pearl Jam ever did was deciding to craft a different set list every night, never succumbing to the pressure to play a show with X number of hits or a crowd-pleasing opener. Although at the time some of the bandmates disagreed (in 20, Gossard recalls being frustrated and asking, "Can we please just play a fucking hit?") this approach has put them in a position where they play what they want, keep things interesting and don't disappoint the fans in doing so.

Having a cause .... or ten. Pearl Jam openly opposed Ticketmaster and crooked politicians while wholeheartedly supporting abortion rights and countless benefit concerts. While a band definitely doesn't have to be political to be great at what they do, it's easy to care about a band that cares so much.

Taking a break from the press Sometimes, the best thing to do is hide out for a while. Of course, even if you stop making videos, put up a wall in front of your house and refuse to do an interview, you could still end up on the cover of Time magazine..

Acknowledging that drugs will fucking kill you When Andrew Wood (of Mother Love Bone) overdosed in 1990, his death was sobering (both figuratively and literally) for many in the Seattle music scene. Between the effect this had on Jeff Ament and Stone Gossard and Vedder's own experience with loss, this band was, well, above the influence (with the exception of Mike McCready's brief bouts with abuse).

Understanding that, when something's broke, you gotta put a bit of fixin on it. Like any band, Pearl Jam didn't always get along, but they decided to work through their issues rather than breaking up, and have a better band and a massive body of work to show for it.