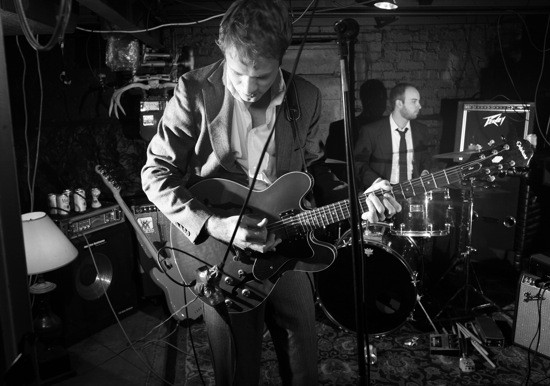 Jon Hardy, of black-tie, blue-collar rock band Jon Hardy & the Public, was in a St. Louis park last Sunday, the 11th when what he will only describe as a "freak accident" sent him to the hospital. He wound up with two fractured vertebrae, some minor bleeding in his brain (which quickly stopped on its own) and spent two and a half days in the hospital. He's home now and on the path to recovery.

"I can't really do a whole lot of moving around. I'm certainly not confined to a wheelchair, but the doctors don't want me doing any serious exercise beyond walking," he says. "Certainly our performances fall under the category of beyond simple exertion." The band has canceled several upcoming performances; as of now Hardy isn't sure when he'll be able to perform again.

After some debate, it was decided Hardy didn't need surgery -- he is, however, wearing a back brace. "I'm pretty optimistic, but I don't want to say anything until I've had my second check-ins with the doctors," he says.

Among the apperances the Public has had to cancel is Higher Ground, KDHX's Stevie Wonder tribute scheduled for the 30th of this month at Off Broadway. Hardy says the band will use the unexpected time away from the stage to work on its full-length, which is very tentatively scheduled for a release by the end of spring.

"It's certainly a disappointment because of the stuff we already had set up, but in the end I don't think it's going to be that big of a setback," says Hardy.

Beyond the music, this is just crappy news. Hardy's in relatively high spirits, but he is in a lot of pain and the medical bills from this sort of thing surely aren't pretty. Our hopes go out to him for a speedy recovery.

A Hard Year from Jon Hardy & The Public on Vimeo.