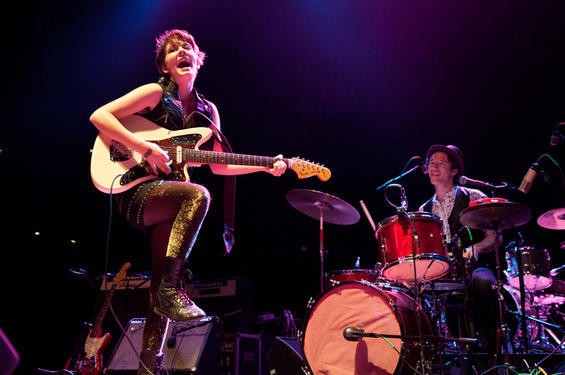 Those Darlins loves St. Louis, and St. Louis loves the band right back. The beloved mid-Tennessee quartet was preceded by Bunnygrunt, which played a set full of its regulars and some oldies. The Grunt's cover of the Kings' "Beat Goes On/Switching to Glide" blended right in with the band's retro '80s vibe.

Those Darlins' compatriot Wagons came from Australia and brought plenty of outlaw country schtick with them. Frontman Henry Wagons started with a strong baritone and plenty of manic leaping and macho parading. And then it got weird.

He shared a story about a shotgun-wielding farmer running them out of a cornfield during their Friday drive from Carbondale, Illinois, to St. Louis. He discussed Australia's love of obese Elvis before launching into a cover of "Never Been to Spain". During "Willie Nelson," Henry jumped into the crowd, instructing them to sing the chorus so he could experience it in surround sound.

Then Henry took a spot behind the drum kit while drummer Si the Philanthropist turned his back on the band's country kitsch and rapped.

While the Wagons act was entertaining in an over-the-top, high-energy way, the band excelled in the least likely arena: a straight-forward rip on small-town life. After polling the audience on the worst town in the St. Louis area, the band dedicated "Good Town" to Belleville, Illinois. With its folk lyrics of disappointment and loss punctuated with extended shrieking guitar jams, the song owes a debt to Uncle Tupelo's country punk roots. Whether Wagons made that connection, I don't know, but after the antics of the rest of the set it was refreshing to see the members really showing their skills.

Those Darlins roared into "$" with Jessi Darlin in full-on Wanda Jackson growl. While her voice recalls Jackson in recordings, in concert she's a dead ringer. The similarities don't end with the first song. Jessi maintains her feminine bearcat roar into the three-part harmonies of "Be Your Bro" and "Waste Away", all from their most recent album, Screws Get Loose.

By "Bumd", then sizable crowd had worked itself into a full-on thrash, egged on by the band's dual guitar assault and primal beats.

Drummer Linwood Regensburg took vocal duties on Garland Jeffery's "Wild in the Streets" while the Darlins accented with harmonized whispers and guitar ferocity. As the show progressed, they quietly swapped instruments without straying from the two guitar, one bass set-up. Their playing styles vary enough that the swapping made for nuanced changes in the overall sound.

The band proclaimed Off Broadway its favorite place to play in one of its favorite cities before launching into "Red Light Love" with the audience chanting and bouncing along.

For "Screws Get Loose" the band covered a full spectrum of guitar rock in an extended jam that they only hinted at on the album.

It was just a warm-up for the final song of the set -- an announcement that was greeted with disappointed booing. Who expected that last song to be a ten-minute-long throbbing, sultry take on Johnny Kidd and the Pirates' 1960 hit, "Shakin' All Over". Although the song was covered earlier this year by Wanda Jackson, her sound-alike Jessi opted to jump into the audience with her guitar while Nikki Darling not only took over the vocals, but the whole stage. With no instrument, she panted her way through the song with everyone but Regensburg launching into the crazed audience and bouncing back onto the stage. Back and forth, the band and audience merged while Nikki fell into a raised-hand chant, breathing the word "shake" over and over, stripping the gloss of Jackson's sleek take on the song, before moving into Patti Smith-style dark cries of "shake, baby shake", while Jessi and Kelley Darlin shredded into echoing, screaming guitars with Nikki pacing the stage, almost slipping into a Mick Jagger strut while the music slowly built, growing frantic and huge, then sprawling and wild before building again, not ending until after Nikki jumped into the crowd with her mic, howling "What are you running from?" over and over.

They returned for a four-song encore that picked up where the "Shakin' All Over" frenzy ended, not ending until Jessi was being passed over the heads of the crowd while wailing on her guitar, safe in the hands of a crowd that loves her.