Fashion Week Music: The Highlights, The Appearances And The Odd Soundtracks 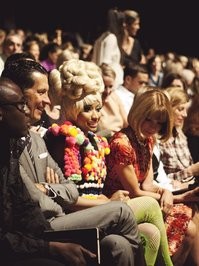 Thank science Fashion Week is over. Isn't it just torture? If there's something worse than not being in New York City for the circus that is Mercedes Benz Fashion Week, it involves not breathing or swimming in a pool of maggots with Michelle Bachmann eyes. The celebs! The CLOTHES! The Mulleavy sisters! Tavi F*%#ing Gevinson! We're crying big fat Marc Jacobs Lola scented tears over here.

One thing that always fascinates us about fashion week is the music: the trends, the appearances, the inevitable Kanye and Gaga factor. Was it like 2010 when Florence and the Machine echoed across way too many catwalks? Will Nicki Minaj -- Betsey Johnson's new muse -- wear something horrible? Who will be the big new star to bust out of the tents?

The answer to that last question is undoubtedly UK sensation Katy B, who tore up Lincoln Center at the W Hotel party with her grimy dance beats. The flame-haired songstress and her Columbia debut On a Mission are second to Adele's 21 on the UK charts. But it wasn't all Katy -- both Florence and Adele's music made an appearance at the shows, backing Michael Kors' safari inspired prints for spring.

As for Gaga and Kanye, it turns out Kanye's real fashion splash is slated for October 1; he'll show his new womenswear line at Paris fashion week. Traitor! Haus of Gaga main man Nicola Formchetti opened a pop-up shop of Gaga gear in Tribeca.

Other Highlights: Mia Moretti, who DJed the Alice and Olivia show, dropped some Siouxsie, the Rapture song that no one can get enough of: "How Deep is Your Love," Au Revoir Simone, Theophilius London and Donovan.

Always the badass, Marc Jacobs killed the finale yesterday, debuting his ridiculously chic collection, his models marched to Phillip Glass' Einstein on the Beach. Glass shows up on a lot of runways -- Lanvin, Jacobs in 2006, and the late, great Alexander McQueen.

The Mulleavy Sisters, aka Rodarte, kept sort of an M. theme with Mazzy Star's "Fade Into You" and Morrissey's "Everyday is Like Sunday" for their Van Gogh-esque line of silken prints and surprising silhouettes. 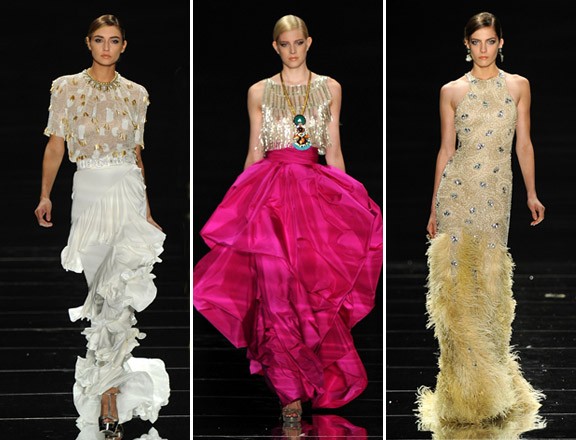 DJ Chelsea Leyland shocked the hell out of Naeem Khan's crowd, pairing her beyond gorgeous couture gowns with Marilyn Manson and the Dead Weather.