Cranky Yellow Is Closing For Good 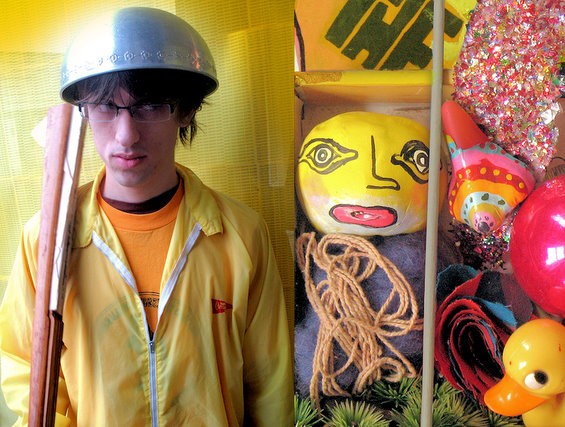 For the last two months, Cranky Yellow has been closed, but transmissions from its social-media arm led patrons to believe at some point the curio shop would reopen. Earlier this week, owner and operator David Wolk announced via his Facebook page that Cranky Yellow is indeed done for good.

"When I first opened Cranky Yellow I felt so industrious and driven. That feeling has been replaced with stress and fear. That's how I know it's time to go," Wolk said.

Since the "soft closing" a few months ago -- spurred by the City of St. Louis ordering Cranky Yellow to get a certificate of occupancy before continuing to hold shows in its basement venue -- Wolk has spent the intervening days looking at his options and noodling the past five years he's spent making his Cranky dream a reality.

"Then it was just a matter of coming to terms with the fact that I would have to officially close the doors," said Wolk. "When I first made the announcement I was really emotional and sad. Now I'm so pumped to wrap up this chapter and move along. I'm grateful and humbled by the artists, musicians and creative types that have helped Cranky Yellow along this far. It really is quite a collaborative accomplishment. Five years. Whoa."

The last year or so of Cranky Yellow was marred by tax problems, letters and summonses from the City of St. Louis for everything from mold in the basement to improper trash disposal. But it was also a place that effortlessly grew an organic sense of community from its DIY and experimental shows. National touring bands and locals found a home at Cranky, and the crowds that gathered there a few times a week will fondly recall sweating to hardcore in the basement, the impromptu sidewalk parties between sets, rationing toilet paper in the bathroom and watching their friends jam out on the non-stage.

"I've gotten tons of messages online and people sending me mail and offering to help. From all over, not just St. Louis. It's so remarkable to know that many people care about Cranky," said Wolk, adding that other Cherokee business owners seem glum about the news. "But everyone is working really hard to keep their own doors open. I just want people to support the hell outta small and local business."

Cranky Yellow took home one of our own Web Awards earlier this year, and even grabbed a coveted Best Of for Best Junk Store in 2010. The shop had visitors from all over the globe, as well as local and international artists selling their wares in the whimsical store. Cranky also found the time to sponsor events like the Acro Cat Circus and Drawgasmic drawing competition.

Wolk has already secured a new job; he'll be working at a Web development firm in south city, and warns us that he's still got some plans to keep aspects of the Cranky brand moving forward. He's not sure what will take Cranky's physical place at 2847 Cherokee Street when they move out in November, but says, "This is Cherokee Street. No time to waste."