Wilco Gets the Lullabye Treatment: Listen To A Soothing "I Am Trying To Break Your Heart" 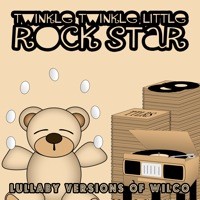 No one can accuse this of being dad rock: On Aug. 30, Twinkle Twinkle Little Rock Star, a series that transforms artists' songs into children's lullabies, released a Wilco edition. The album features twelve tracks including "Heavy Metal Drummer" and "I Am Trying to Break Your Heart."

Twinkle Twinkle Little Rock Star, started by Paul Modiano in 2009 out of Redondo Beach, California, aims to create sophisticated lullabies that can be enjoyed by parents and babies alike. Modiano recognized that most lullabies were novelty-based and difficult for parents to listen to. Listen to a clip from the Twinkle version of "I Am Trying To Break Your Heart" below.

"[TTLRS is] not just a gimmicky thing," Modiano said. "It's really designed to appeal to people of all age groups."

In the past two years, Twinkle Twinkle Little Rock Star has put out 48 full albums of lullabies of artists including Lady Gaga, Radiohead, Sublime and Michael Jackson. But Modiano, a longtime fan of Wilco, described his decision to make a Wilco lullaby album as a labor of love.

"I chose Wilco because Jeff Tweedy is hands-down the best singer-songwriter this generation," Modiano said. "On this album I actually went to my producers' studios to make sure it was sounding the way I wanted it to sound. I think it turned out fantastically."

Modiano said he chose songs to include on the Wilco album based on his favorites, fan favorites and songs that represent the best sales. While the release has twelve tracks, Modiano said he's not finished and plans to release another volume of Wilco lullabies within the next year.

"People can expect a refreshing take on their favorite band," Modiano said. "Expect to be surprised--fans that don't have kids are going to enjoy this release as much as parents trying to put their children to sleep."